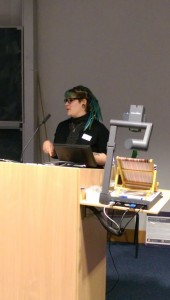 Sara at the NRN conference

The Nordic Research Network (NRN) Conference held at the University of Glasgow in May 2016 was my very first conference. It came on the heels of my graduation with a second master’s degree from the same institution and could not have been more perfectly timed. I was beginning to feel the unease that so many postgraduates and early career researchers feel, the increasing pressure to do something with my degree, the nagging worry that my research would never see the light of day, the ever looming question; was it worth it? So when I heard about the NRN Conference I decided to submit an abstract and a short biography for consideration. A few weeks later, I received an email saying that my submission had been accepted. Moreover, I was contacted by ScARF because my research focuses on Norse activity in Scotland. I was so grateful for the opportunity to work with such an amazing organisation and it really gave me that extra bit of confidence I needed to put my best work forward.

Focusing on Viking graves in Scotland and the Isle of Man, my research demonstrates that Insular metalwork was frequently adopted as part of the Scandinavian dress both in Norway and the British Isles. This indicates a correlation between Scandinavian social status and the public display of Insular goods. Both cultures likely operated on some form of gift exchange and it is possible that the exchange of Insular ornament between British and Scandinavian elite could have formed part of this tradition. There is also burial evidence to suggest that during this time Norwegian women experienced increased status throughout the agricultural region of Sogn og Fjordane as well as in northern Scotland, an area which shows similar evidence for agricultural activity. It is in these female graves that the highest concentration of Insular metalwork is found, suggesting that they participated in these gift exchange networks and a link between agriculture and prestige. This removes the necessity of considering these objects ‘loot’ and presents the opportunity to re-assess the nature of Scandinavian contact with the Insular world.

The generosity of the ScARF bursary allowed me to attend the NRN conference where I was able to present my research for the first time. It was a wonderful opportunity to showcase my own work as well as learn about other research being done in the field. I was able to network with researchers from across the globe and grow my list of contacts. But perhaps the most valuable aspect of ScARF’s outreach has been the confidence it has instilled in me as an early career researcher. It has allowed me access not only to the NRN Conference, but also an entire online network of peers and researchers involved in various aspects of Scottish archaeology. It has also given me the opportunity to access fellowship to the Society of Antiquaries of Scotland. Both of these groups are invaluable in terms of networking and access to current research and my confidence and ambition to push forward with my research have grown immensely because of this opportunity. Thank you again!