For over 230 years the Society has been actively supporting the study and enjoyment of Scotland’s past.

As the oldest antiquarian society in Scotland, founded in 1780 by David Steuart Erskine, the 11th Earl of Buchan (1742-1829), and incorporated by Royal Charter in 1783, the Society was born during a period of intellectual energy in Scotland renowned as the Scottish Enlightenment.

Many of those contributing to that energy were already, or would become, members.  A succinct account of the inauguration and early history of the Society written by William Smellie (1740-1795), Superintendent of Natural History of the Society from 1780 and compiler of the first Encyclopaedia Britannica, can be found in the first of our Proceedings, then known as Archaeologia Scotica the Transactions of the Society of Antiquaries of Scotland. 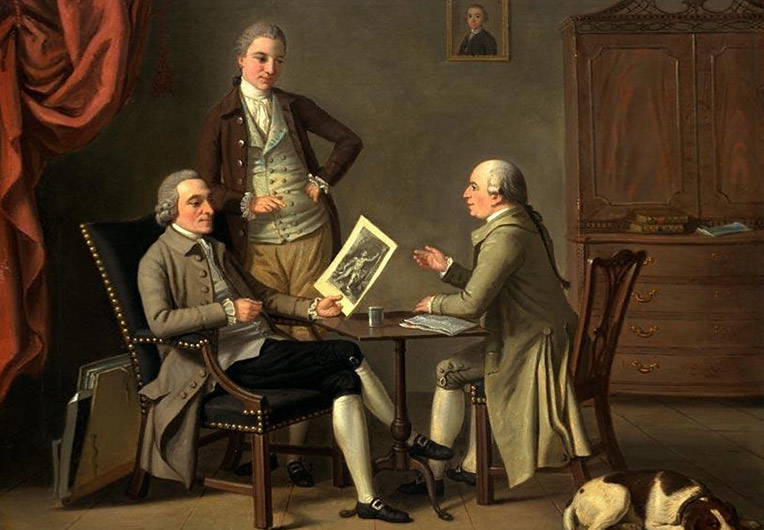 The purpose of the Society is set out in the Royal Charter: “…to investigate both antiquities and natural and civil history in general, with the intention that the talents of mankind should be cultivated and that the study of natural and useful sciences should be promoted.”

The original members began to donate material to the Society from its inception, and in 1781 it bought a property so that the donations it received could be properly deposited. The Antiquarian Society Hall appears on the Alexander Kincaid A Plan of the City and Suburbs of Edinburgh in 1784, located off the Cowgate and behind Parliament Close off the Royal Mile (then Lawnmarket).  After several moves, the Society rented accommodation in the Institution for the Encouragement of the Fine Arts (later the Royal Institution) at the foot of The Mound in 1826 (now the Royal Scottish Academy). A detailed account of the history of the Museum was written by RBK Stevenson, former Keeper of the National Museum of Antiquities of Scotland and President of the Society, in The Scottish Antiquarian Tradition, edited by A S Bell and published to mark the bicentenary of the Society and its Museum in 1981.

Members have, since 1823, been known as Fellows of the Society, and there are now thousands of Fellows spread across the globe, including Honorary Fellows elected for their outstanding scholarship.  Fellowship is by election, held annually on St Andrews Day, 30th November; and is open to all with an interest in Scotland’s past.  Fellows may use the post-nominal ‘FSA Scot’. 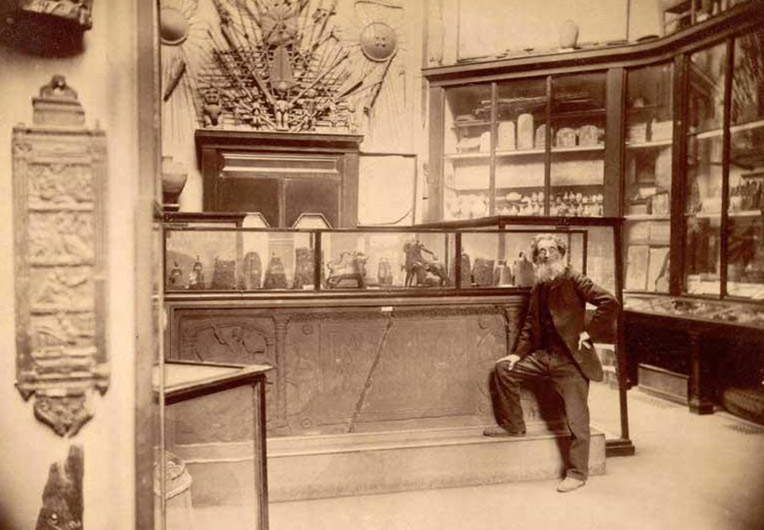 In 1841 there were over 4,000 visitors, including the Queen and Prince Albert, to the Society Museum to view the thousands of objects collected over the previous 60 years. By 1850 free admission to this collection was attracting 17,000 visitors per year, which led in turn to the accelerated expansion of the collection as donations flowed in, and to the publication of a 150 page catalogue. 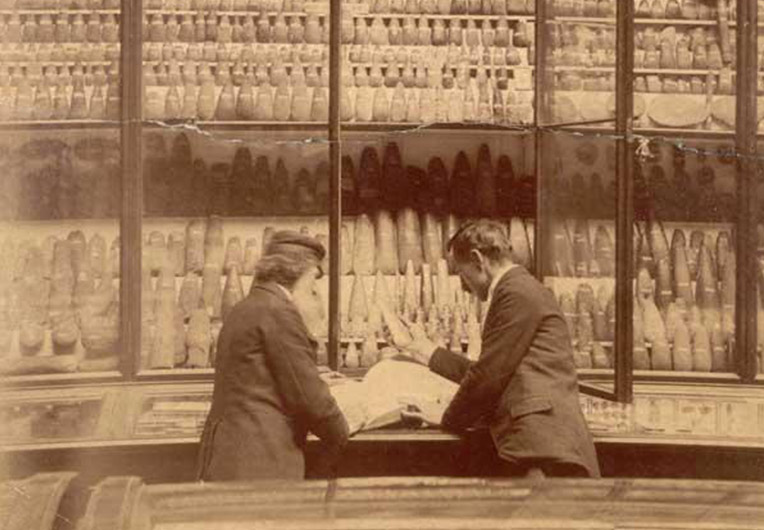 In November 1851 the signing of a Deed of Conveyance with the Board of Manufactures on behalf of Parliament made the Society collections National Property in return for fit and proper accommodation at all times, for the preservation and exhibition of the collection, and also for the Society’s meetings, free of all expense to them. By this time the collections were housed in 24 George Street, but were moved back to the Royal Institution in 1858 as part of the Conveyance. This transfer also freed the Society to invest in the initiation of the annual Proceedings. The Society and collections then moved to the purpose built accommodation on Queen Street endowed by John Ritchie Finlay in 1882 and completed in 1890, designed by Sir Robert Rowand Anderson (1885-1890) and shared with the National Portrait Gallery. 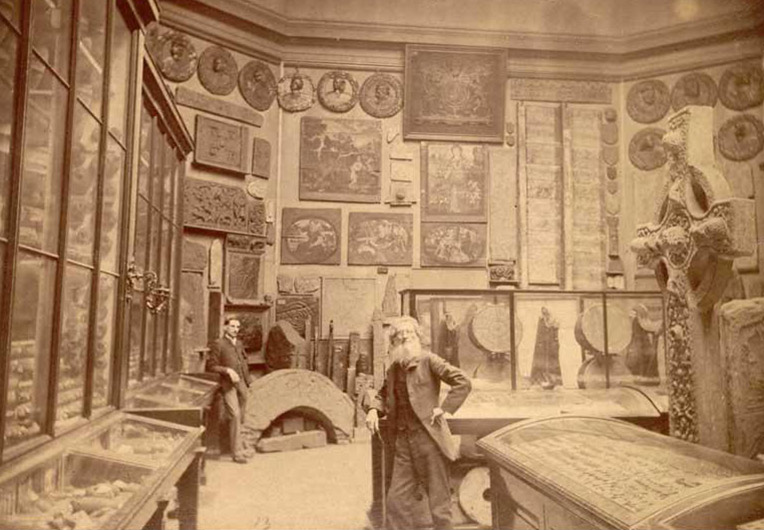 The Society was thus relieved of the charge and management of the Museum, but this did not affect the other relations including the mutual arrangements represented by the library and the housing of the Society. From Queen Street, where the museum and Society were housed since 1890, the collections were moved to Chambers Street where the National Museum of Antiquities merged with the Royal Scottish Museum to create National Museums Scotland (NMS) in 1985.

The Society is presently housed free of rent within the NMS on Chambers Street. Over the centuries various organisational structures have been employed by the Society to further its ends, including the employment of a Secretary, relatively recently transformed to a full-time Director.  The Society collection formed the core of the national archaeological collections now housed in the NMS, and other parts are now in the National Archives of Scotland, the National Library of Scotland or the National Galleries of Scotland, as well as the Royal Commission on the Ancient and Historical Monuments of Scotland (RCAHMS) and elsewhere.

The Library in the NMS contains a unique collection of books dating back to the foundation of the Society, and it continues to receive periodicals from around the world, in exchange for the Proceedings.  Fellows are statutorily entitled to free access to the NMS Library through the National Heritage (Scotland) Act 1985 (Section 3(5)), and enjoy borrowing privileges.  The library is free to access from the Technology by Design gallery on Level 3 in the west wing of the Royal Museum building. 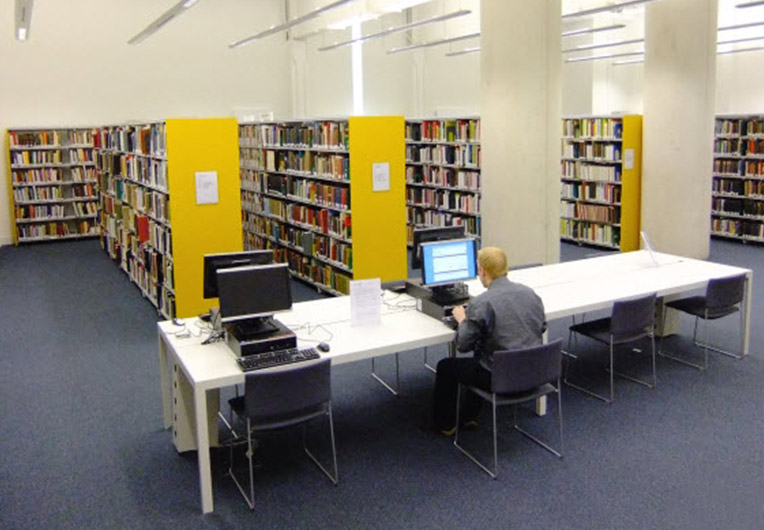 As the senior antiquarian body in Scotland the Society has an important role in the cultural life and heritage of Scotland. We provide a forum for ideas and the presentation of new information through our lectures, seminars and workshops, as well as local, national and international conferences.  We also educate through our publications and news items on this website.  Our prizes and grants encourage and reward excellence in the fields of archaeology and history.  We draw on a wide range of experience through the Fellowship and Council, and provide an impartial voice independent of the opinions of Government, University, or Agency. The Society is often consulted on different matters relating to heritage, and it is represented on many committees, boards and councils.  Membership of the Society enables Fellows to play an active part in safeguarding Scotland’s past.