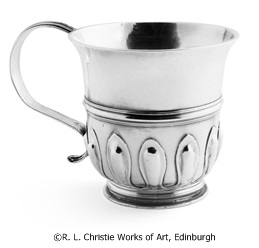 Guest speaker: The lecture will be given by Colin T Fraser FSA Scot, R. L. Christie Works of Art.

Since the seminal exhibition ‘Silver; Made in Scotland’ held by the National Museum of Scotland in 2008 there has been a greater appreciation and understanding of the Scottish Goldsmiths craft. Over the past 10 years many new discoveries have been made and new light has been shed on previously well-known pieces. This talk aims to illustrate and discuss these new finds while placing them in a context of the wider survival of the Scottish applied arts and cultural landscape they were created.

Immediately after the lecture there will be a drinks reception in the Events Space. This has been made possible thanks to Gillespie Macandrew LLP solicitors as event sponsor. You will also have the opportunity to purchase the newly published Native and Roman on the Northern Frontier (Roger Mercer), as well as Late Roman Silver: The Traprain Treasure in Context (ed Fraser Hunter and Kenneth Painter). The Society’s silver pin badges will also be available to buy.

Event sponsor: Gillespie Macandrew LLP is an independent Scottish law firm with offices in Edinburgh, Perth and Glasgow. With year on year growth over the past 5 years, it has a highly regarded reputation in rural and strategic land, energy, commercial and residential property and private client work, along with a growing reputation in corporate and broader commercial practice.