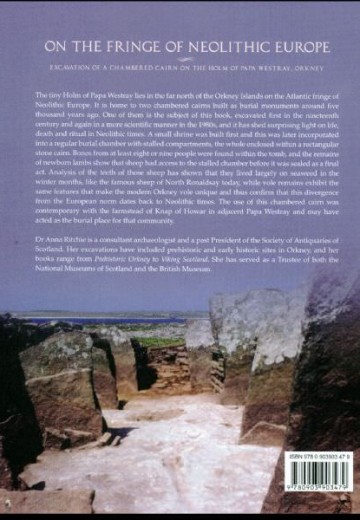 On the Fringe of Neolithic Europe

Excavation of a Chambered Cairn on the Holm of Papa Westray, Orkney

The tiny Holm of Papa Westray lies in the far north of the Orkney Islands on the Atlantic fringe of Neolithic  Europe.  It  is  home  to  two  chambered  cairns  built  as  burial  monuments  around  five thousand  years  ago.  One  of  them  is  the  subject  of  this  book,  excavated  first  in  the  nineteenth century and again in a more scientific manner in the 1980s, and it has shed surprising light on life, death and ritual in Neolithic times. A small shrine was built first and this was later incorporated into a regular burial chamber with stalled compartments, the whole enclosed within a rectangular stone cairn. Bones from at least eight or nine people were found within the tomb, and the remains of newborn lambs show that sheep had access to the stalled chamber before it was sealed as a final act. Analysis  of  the  teeth  of  those  sheep  has  shown  that  they  lived  largely  on  seaweed  in  the winter months, like the famous sheep of North Ronaldsay today, while vole remains exhibit the same features that make the modern Orkney vole unique and thus confirm that this divergence from  the  European  norm  dates  back  to  Neolithic  times.  The  use  of  this  chambered  cairn  as contemporary  with  the  farmstead  of  Knap  of  Howar  in  adjacent  Papa  Westray  and  may  have acted as the burial place for that community.

The Society of Antiquaries of Scotland gratefully acknowledges funding towards the publication of this volume from the Binks Trust, the Robert Kiln Charitable Trust and Historic Scotland.