The Society is pleased to announce the publication of two new Scottish Archaeological Internet Reports, available now at the Archaeology Data Service.

SAIR was established in 2000 to publish freely accessible, fully peer-reviewed archaeological information. We are delighted that this latest update sees the publication of the 75th (and 76th!) paper since SAIR began.

The two latest papers report on excavations from the Isle of Lewis: SAIR 75 on excavations in 2009 and 2010 on Cnip Headland, and SAIR 76 on a 40-year programme of excavation and survey at Barabhas Machair. The Society gratefully acknowledges funding towards the publication for both papers from Historic Environment Scotland.

To read the abstracts and access the papers, please see the details below: 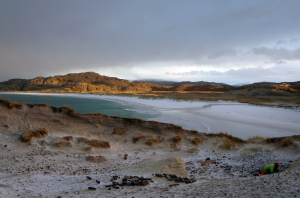 The deflation hollow from the north during the January 2009 excavation

Excavations in 2009 and 2010 on Cnip Headland, Isle of Lewis investigated three different burials in shallow pits and on a kerbed mound, containing the inhumed remains of at least nine individuals in both articulated and disarticulated states. Bone histology analysis indicates that the bodies of all but one (a stillborn infant) were allowed to decay and become partly or wholly skeletonised before being buried at this spot. Worn jet beads, a copper-alloy awl and pieces of boar tusk and marine ivory accompanied some of the remains. The burials lay around a cairn, which previous excavations have shown was built in the 3rd millennium bc and then rebuilt twice, with both cremated and unburnt human remains incorporated in it. Another inhumation burial in a stone-lined pit close to the cairn was excavated in the 1990s. Bayesian analysis indicates that the cairn’s first reconstruction and the placing of human remains around it took place over a period of up to 150 years between 1770 and 1620 bc. The headland’s long use for rites involving human remains illuminates relationships between living communities and their lineages in Early Bronze Age north-west Scotland. The work was carried out for Historic Environment Scotland under the Human Remains Call-off Contract. 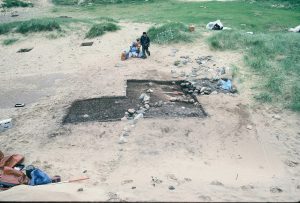 The townships of Barabhas are on the west coast of the Isle of Lewis, in the Outer Hebrides between the blanket bog of Barabhas Moor to the east, and machair and the Atlantic Ocean to the west. The Barabhas Machair (centre NB 351 513) has been eroding for at least a century, and of archaeological interest for nearly as long. Survey and excavations over the last 40 years have revealed settlements from the Early Bronze Age to the present day, in a landscape that has been used and reused. This paper is the first of a series presenting the results of this fieldwork, reporting on the results of the surveys and on the results of initial documentary research, and has been produced as part of a wider post-excavation project supported by Historic Environment Scotland.

We hope you enjoy the latest additions to the SAIR collection. Remember, all SAIR papers are published Open Access and are freely available to read and download at ADS. You can see the full list of previous publications here.

If you would like to submit a paper to SAIR please view our guidelines for authors, or contact the Managing Editor.

It’s not too late to give the Society your views on SAIR! Please click the link below to complete a short questionnaire (it should take you around 10 minutes) about your experience of using SAIR. As a token of gratitude, there’s also a chance to win a £50 book voucher for the Society’s online shop!