Native and Roman on the Northern Frontier: Now published

Fresh Perspectives on Roman and Native relations in South-West Scotland 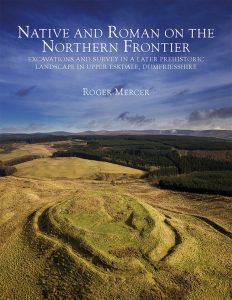 Native and Roman on the Northern Frontier is now available. Cover design by Kevin Hicks

Key findings from important archaeological investigations in south-west Scotland have today been published in Native and Roman on the Northern Frontier: Excavations and Survey in a Later Prehistoric Landscape in Upper Eskdale, Dumfriesshire, by Professor Roger Mercer FSA Scot. The book is being published by the Society of Antiquaries of Scotland supported by a grant from Historic Environment Scotland.

Eskdalemuir is an area rich in historic remains, from Roman camps to stone circles, prehistoric settlements and hill forts. As part of wider investigations in the area, which started in 1984, archaeological investigation undertaken at Castle O’er Hillfort and Over Rig enclosure have revealed tantalising clues to the political situation on the frontier of the Roman Empire.

The book reveals the complex story of Castle O’er, a spectacular hilltop site with a series of dramatic banks and ditches. It may have served as part of a system to control large numbers of animals during the time of Roman occupation and may have ended its life in flames, leaving the ramparts vitrified. The unique enclosure at Over Rig is suggested to be a hitherto unknown type of ceremonial site which may have served as a kind of ‘auditorium’ which was in use in the first and second centuries AD. Roger Mercer, the book’s author and Director of Excavations, explains: “It may have served what we would call ‘social purposes’, or it could have been the focus for ceremonial activity.  The site’s secluded location, set within what palaeoenvironmental studies tell us was a wooded dell directly beside the River Esk, echoes much that we learn from Roman authors about Celtic ritual places and offers an entirely new perspective on such sites. It may indeed be related to sites of a broadly similar character, although in rather different circumstances, in Ireland at the period.”

“We are delighted to be supporting the publication of the results of the major excavation,” said Dr Kevin Grant, Archaeology Officer at Historic Environment Scotland. “The specialist analysis of the finds including glass and wood provide new insights into relationships between the Romans and the local people of south-west Scotland. The findings at Over Rig show us the role of horse and cattle rearing in this part of Scotland – and the potential military significance of this to the Roman Empire.”

The Society of Antiquaries of Scotland’s Managing Editor Catherine Aitken, who is publishing the book said: “The Society is pleased to have worked with our past President Roger Mercer on this new book to publish the results of two excavations in an area of Scotland with relatively little large-scale research into the Iron Age. The potential enclosure at Over Rig is particularly exciting, introducing a new and intriguing site-type that greatly adds to our current understanding of the Iron Age.”

The full-colour hard-bound book, costing £30, is available from the Society of Antiquaries of Scotland’s website and a variety of online booksellers.

About the Society of Antiquaries of Scotland