Analysis of floor surface deposits at the Ness of Brodgar, Orkney

A Society grant funded thin-section analysis of deposits excavated at the Ness of Brodgar.

A Society grant funded thin-section mineralogical and micromorphological analysis of deposits within structures being excavated at the Ness of Brodgar, in the ‘Heart of Neolithic Orkney’ World Heritage Site. 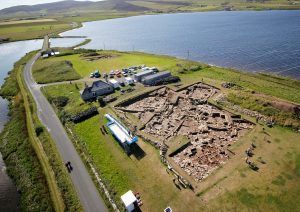 Surrounded by iconic sites such as Skara Brae, the Ring of Brodgar and Maeshowe chambered cairn, the Neolithic complex at the Ness of Brodgar represents one of Europe’s most important ongoing fieldwork programmes, located at the heart of an internationally significant prehistoric landscape (Card 2012). Over a decade of excavation has uncovered a fantastically preserved complex of monumental structures and an amazing quality and diversity of archaeological material, representing over a millennium of activity (Card et al., in press).

Archaeological preservation at Ness extends to deposit sequences within the buildings. Both ‘occupation’ deposits and structural elements such as floor surfaces, foundation and levelling layers form complex sequences representing multiple phases of construction, use, and remodelling.

A programme of micromorphological sampling aims to unlock the vast amount of archaeological information held within these vitally important sequences (McKenzie 2015). In 2016, a grant from the Society helped us take this embryo project past the field and into the lab, funding processing and analysis for a group of samples located within three key buildings – Structures 1, 8 and 12. 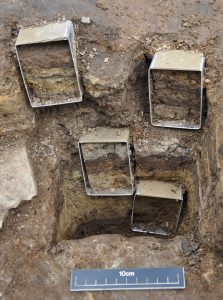 Micromorphological sampling through construction and activity deposits within Structure 1. The upper three samples were selected for the SAS-funded analysis. image credit Jo McKenzie 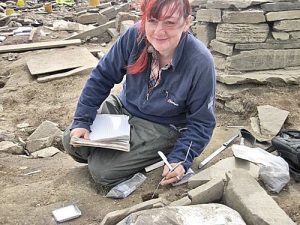 Micro-archaeological evidence for activity and use: occupation-related deposits and their relationship to construction horizons

Micromorphology is one of the most useful techniques for investigating deposits formed through intensive human activity, allowing assessment of microscopic indicators such as char and ash, bone, organic residues, pottery, vitrified materials and silica features in context with characteristics of sediment deposition and environmental processes. Micromorphology allows holistic interpretation of such features, and this can identify and characterise in-situ events – for example, the horizontal concentration of trampled organics, bone and charcoal indicating an otherwise invisible micro-surface. At Ness, the upstanding archaeology allows sample locations to reference elements such as entrances, recesses, internal furniture such as hearths, paving and cists, and internal demarcations formed by orthostats, sills and thresholds – relating microscopic features to the organisation of the structures. Through this, we can investigate building function, changes in use through time, use of space, longevity of building use, and, of course, patterns of resource utilisation.

The SAS- funded sample set represents the first batch of this kind of data from the interior of the Ness buildings. A wealth of organic and biogenic features – from char and bone to (see bottom left and top right, below) to plant residues, spores and silica bodies – characterise a wide range of occupation-type deposits which vary in texture, mineralogy and organic content. This opportunity to undertake analysis in context on material still under excavation has created a dataset hugely valuable to the excavation programme.

Spaces inside places: the placement of samples through key locations within Structure 8. Samples in yellow were processed thanks to the Society’s grant. These were selected to provide examples from a range of areas – for example, recess versus high-traffic areas – and for samples showing a good sequence of both construction and activity-related deposits. Main photo credit: Hugo Anderson-Whymark. Other images: Jo McKenzie.

Mineralogies of construction: from macro to micro 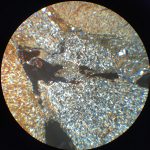 The core aim of this project is to understand not only the activities which took place upon the building surfaces, but the makeup and construction of the surfaces themselves. As well as informing on construction technology and building design, it’s possible that the micromorphology of these deposits may reference the wider social and ritual significance of the Ness complex.

The SAS sample set has facilitated microscopic characterisation of a range of construction and ‘surface’ deposits identified within Structures 1, 8 and 12: hard, usually either fine and compacted or looser but stonier, generally clay-rich layers ranging from grey-white to yellow. Under the microscope, colour, texture and mineralogy for these layers has been classified in detail – and indicate a number of avenues for further research. For example, the thicker yellow construction/levelling layers in the sample set (seen during excavation in the image of the Structure 1 samples above) are dominated by medium/fine sandstones, with notably similar mineralogy (quartz dominated, with a small mica content, often strongly laminated). Size and shape of these rock fragments varies: although there is a tendency towards larger, rectangular fragments with smooth edges, many show significant degradation, flagging up future potential difficulties with assessing rock fragment shape and size. 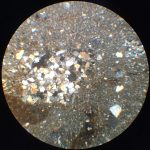 Conversely, thinner deposits, especially those which show a more grey/white matrix, seem to show greater mineralogical variation – a wider range of sedimentary rocks, with coarse quartz arenites and fine siltstones present, larger single quartz grains, and fine-grained metamorphic rocks. However, it is more common to see these grey/white layers almost rock free: composed almost entirely of fine silt to clay. Frequent diatoms in some of these lenses may indicate a marine origin for this material.

These are pointers to the identification of choice in materials for specific deposit types – perhaps the specific use of fragmented/crushed selected building stone to construct thicker levelling and foundation layers, with a more ad-hoc use of coarse mineral material as well as the use of finely graded silt/clay for patching and maintenance, or perhaps waterproofing or sealing specific loci? This helps make our case for further analysis of a wider range of samples, especially within areas whose context may suggest a specialist function, such as recesses within the buildings.

However, it is possible that choices in coarse mineral additions may have a different significance. Excavation has increasingly indicated the deliberate use of specific rock types in different contexts – such as the use of stone of differing colours in building construction, creating a clear visual effect (Card and Thomas 2012). Recently, it has been suggested that these preferences may have included specific geologies. A PhD project by Martha Johnson, investigating the distribution of ‘foreign stone’ (i.e., geologies not outcropping at the portion of the Stenness-Brodgar isthmus occupied by the Ness of Brodgar site) has so far recorded over 2000 examples of unworked foreign stones, such as camptonite. Examples of unworked dyke rocks originating from nearer the site, such as olivine-basalt, are also of interest – deliberately brought to site, these materials show no sign of being worked.

Why are these materials imported? Did rock types from specific, Orcadian but non-local-to-Ness places have meanings beyond the functional or visual – perhaps representing people, or places, or associations with individual structures? The SAS samples were assessed for microscopic fragments of ‘foreign stone’ in order to explore this further. Do we see examples of ‘foreign stone’ material within the surface sequences? Most interestingly, the answer is yes – but, so far, not in any of the clay-and-silt dominated, almost exclusively sandstone-filled stony layers identified as constructional. However, three of the darker ‘occupation’ type deposits within the Structure 1 sequence show small angular fragments of dyke rock, showing an almost identical mineralogy. The image below left shows one of these – located at the top of a slide, adjacent to a large bone fragment. It seems that dyke rock ‘crumbs’ within activity-related deposits may indeed indicate fragmentation, and therefore some sort of purposeful modification, of these materials – but, it seems, not as part of the construction process.

One interesting inclusion seen within the Structure 8 sample set may offer an explanation. The only ‘foreign stone’ fragment within the sample set to show a different geology to the dyke rock fragments of Structure 1 is a rounded fragment of olivine basalt, shown below. This is also located within an activity horizon – in fact, as temper within a potsherd. A second smaller fragment of the same material is seen immediately adjacent. Dyke rock as temper for Grooved Ware pottery is reported from nearby sites such as Crossiecrown (Jones et al.) and it is interesting to consider the potential for some of these ‘foreign’ stones to have been transported for this purpose. These findings illustrate the potential for petrographic analysis of the extensive Ness pottery assemblage to inform further on the use and significance of specific geologies to the people who visited the Ness of Brodgar complex. 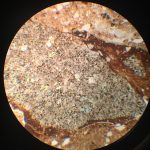 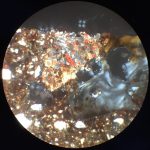 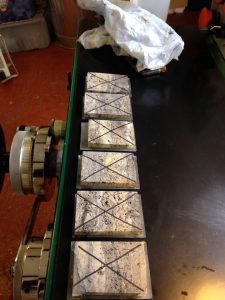 Slides in production in the laboratory at Cambridge. Photo credit: Julie Boreham

A blog post introducing the SAS-funded analyses prompted New York artist Matthew Wilson to initiate a potential collaboration exploring the process of thin section manufacture. Currently an artist-in-residence at the Jan Van Eyck Academie as a NEARCH ‘Art and Archaeology’ Fellow, Matthew has selected the Ness of Brodgar as one of three internationally significant sites upon which his work will focus. 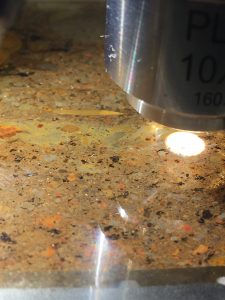 This unusual close-up image of the microscope eye view of a Structure 1 slide beautifully illustrates the richness of the ‘occupation-type’ deposits. Image credit: Jo McKenzie

In November, Jo McKenzie and Matthew Wilson were hosted by Professor Charly French and the Charles McBurney Laboratory for Geoarchaeology, University of Cambridge, and by thin sectioning expert (and Ness slide manufacturer) Julie Boreham of ‘Earthslides’ for a series of lively discussions and lab demonstrations on the path from sample to section – and from imaging to interpretation. This is a wonderful example of how timely funding injections such as the SAS grant can make such a difference to the development of early-stage projects, and we’re excited to see how Matthew’s upcoming works referencing the Ness of Brodgar will offer a fresh perspective on how we view the materials making up the microarchaeology of the Ness building interiors, as we move through sampling and processing to interpretation and curation.

Our warmest thanks go to the Society for making possible such a valuable and informative pilot study.

Card, N. and Thomas, A. (2012) Painting a picture of Neolithic Orkney: decorated stonework from the Ness of Brodgar, in Cochrane, A and Jones, A (eds) Neolithic visual culture: abstraction and figuration, Neolithic Studies Group Monograph, Oxbow.