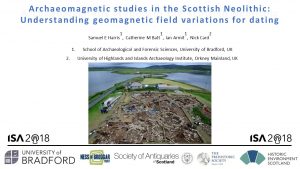 Presentation to the 42nd International Symposium on Archaeometry

The field of scientific research in archaeology moves at a rapid pace from one year to the next. Throughout the last century and continuing into the current century, the sphere of archaeological science has expanded to encompass methods and techniques that reveal nuanced secrets of our past. One of the important aspects of any research is the presentation of one’s own research in an open forum to foster new discussions and debate; crucial if the academic field is to ever evolve instead of stagnating. The international community of archaeological scientists founded this forum in the International Symposium on Archaeometry (ISA) with the first meeting taking place in London in 1961. Since then, the Symposia have travelled the globe with the primary aim to promote and develop debates in Archaeometry. From Oxford, Bradford, Edinburgh to Washington D.C., Toronto and Ankara, the conference has been invaluable at advancing the scientific study of past populations.

Thanks to the generous contributions of the Society of Antiquaries of Scotland’s Young and Student Fellow Grant, the Prehistoric Society’s Conference Fund, and the Ness of Brodgar Trust, I was able to attend the most recent International Symposium on Archaeometry (ISA) and present on my PhD research (“Developing Archaeomagnetic Dating for the Scottish Neolithic”). The 42nd ISA was hosted by the incredibly vibrant city of Mérida, the capital city of the Yucatan in Mexico from the 20th – 26th May (more information can be found here: http://isa2018.mx/ ). 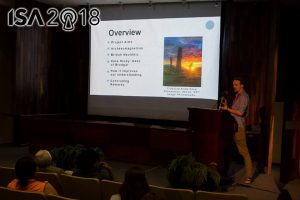 And so bleary eyed and jet lagged, but feeling amazingly lucky, I awoke on the morning of the 21st in the beautiful city of Mérida – the home of Mayan culture. The conference kicked off with a fitting tribute to Professor Martin Aitken who sadly passed away in 2017. Martin’s research at the University of Oxford began in the 1950s and was fundamental in guiding the development of many areas in Archaeometry. From the very beginnings of archaeomagnetic dating and geophysics to his work on thermoluminescent dating of ceramics, Prof. Michael Tite, Prof. Yannis Manniatis, Dr Catherine Batt, and Dr Marco Martini immersed us all into the importance of his research. Amongst a treasure trove of a 5-day conference on archaeological sciences we were treated to a wide variety spanning geographical areas and archaeological periods. Some paper highlights included (but not limited to!): Analysis of Early iron Age eye-beads from Lika, Croatia; Investigating artefacts from Chalcolithic funeral cremation contexts (Portugal) by using non-invasive nuclear techniques; Analysis and experimental approaches for the characterisation of archaeological plant exudes and tars: Prehistory, Ethno-Archaeology and Chemistry. There were also over 200 poster presentations which sparked hundreds of spontaneous discussions during the poster sessions and breaks.

My own research in archaeomagnetism fits particularly well with Martin Aitken’s legacy and shows the continuation of such an intriguing area of study. Archaeomagnetic dating utilises knowledge of past changes in the Earth’s magnetic field to date archaeologically fired materials such as fired clays and ceramics. During my PhD I have been studying fired archaeological remains from across Scotland to improve our understanding of the past geomagnetic field behaviour in order to extend the use of archaeomagnetic dating into the British Neolithic. To the largest collection of archaeological scientists internationally, I presented my paper entitled, “Archaeomagnetic studies in the Scottish Neolithic: Understanding geomagnetic field variations for dating”. Being 1 of 66 papers presented across 5 days was a humbling experience with so many enlightening and up and coming research topics. Importantly for my own research network it was useful to meet the Guatemalan and Mexican archaeomagnetic research groups who have recently published work dating mural paintings from Teotihuacan. Amongst the poster presentations were over 10 specifically related to the study of the past geomagnetic field which was highly useful to consult to aid my own research.

The conference also included a trip to the awe inspiring Chichén Itza and the township of Itzamal which left us speechless. All this would not have been possible without the funding I received. Extending the viability of archaeomagnetic dating as a technique further back into prehistory is an important step to understanding the chronology of past populations.