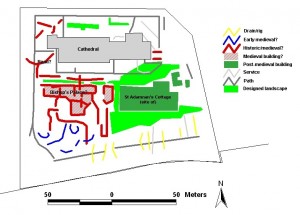 This formed the final phase of a pilot research project investigating early medieval monasteries in Perth and Kinross. Fieldwork included resistance and gradiometer surveys and a total station survey in the grounds of the cathedral. The project aimed to develop discussion of the socio-political role of Early Gaelic monasteries in Pictland by using new investigations to characterise variance in the form and significance of archaeology at these under-studied sites. At Dunkeld a specific aim was to assess the presence and extent of remains relating to the extended ecclesiastical and post-Reformation history of the Cathedral grounds, with a particular interest in locating remnants of the important Early Medieval monastery and Late Medieval Bishop’s Palace. The entire grounds of the cathedral were surveyed with resistance (1m x 1m sampling) and gradiometer (0.25m x 1m sampling) survey. Fieldwork was undertaken in October and November and was the first concerted archaeological investigation in the cathedral grounds since the RCAHMS in 1994. Local volunteers assisted, aiding community involvement that was also supported by online social media. 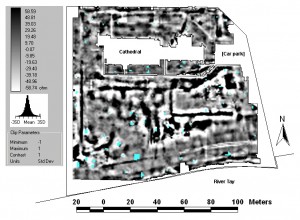 Post-medieval buildings and designed landscape
Prominent readings were recorded south-east of the cathedral, which indicate the remains of a post-medieval private residence known as St Adamnan’s Cottage. This succeeded Atholl House, which was located north of the cathedral and demolished in the early 19th century. The later house was a modest rectangular building with associated range of outbuildings and small landscaped gardens. The policies are visible on 19th-century maps of the grounds.

Bishop’s Palace
To the south of the cathedral and west of the site of St Adamnan’s Cottage there was a series of distinctive high resistance linear readings. The magnetic survey did not produce clear contrasts with the natural in this area. The resistance readings are thought to derive from remains of medieval buildings in the Bishop’s Palace and chanonry. A range of buildings aligned east to west are indicated with possible internal dividing walls and a smaller adjoining range to the south. A series of buildings in the same general arrangement are partially visible on Slezer’s 1693 view of the Dunkeld, which also shows the ruins of the Bishop’s towerhouse to the west and Bishop’s Hill, the Mutehill of Dunkeld. Furthermore an anonymous 18th-century illustration of the cathedral’s west gable also shows the west gable of a two storey late medieval building, which is probably the same shown on the geophysics.  Part of these buildings may be visible on Stobie’s map of 1802, which indicates several structures in the same area. The geophysics may represent foundations of a hall and larder built by Bishop Cardney in the early 15th century and added to by Bishop George Brown (1483-1514).

Early Medieval
There were few potential early medieval remains, largely due the expected high degree of medieval and modern disturbance in the grounds. Some possible features were indicated by prominent curvilinear resistance reading in the south-west corner of the grounds. These were located at a raised level area with steeply sloping ground to the south and could relate to fragmentary remains of small enclosures. The likelihood of disturbance from the medieval buildings and landscaped garden features make further interpretation unwise at this stage. Nonetheless these anomalies do provide useful targets for future investigation. Further analysis of the geophysical results and consideration of the early medieval landscape at Dunkeld will be forthcoming in subsequent publication of the findings. 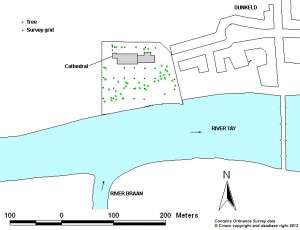 Cathy MacIver was commissioned to undertake a total station survey. This recorded the geophysics survey grid and key topographic and upstanding features such as trees and boundaries. The survey facilitated accurate georeferencing of the geophysical data.

Members of Dunkeld Cathedral Kirk Session, Dunkeld & Birnam Historical Society and FPKHT assisted with the fieldwork and had the opportunity to use the survey devices. Special thanks go to David Arbuthott, Ian Sinclair and Joan Brookes for assistance throughout and access to archive material held at the Cathedral, and to Tony Simpson and Wendy MacPhedran. Sincere thanks also go to Dunkeld Cathedral Kirk Session and Historic Scotland for permission to undertake the surveys. 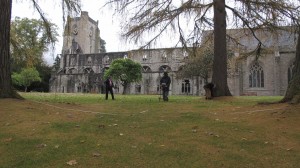