Daily activities and resource use in Neolithic Orkney 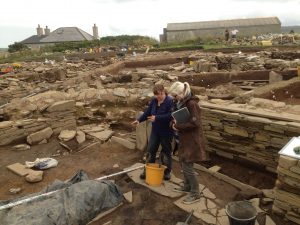 In August 2013 fieldwork was undertaken at the Orkney World Heritage Site for the project Daily activities and resource use in Neolithic Orkney: micromorphology of buildings and middens from the Ness of Brodgar. The exceptional preservation of architecture and domestic waste deposits at the Ness of Brodgar provides a unique opportunity to investigate the daily activities of the Neolithic people who lived here. The first aim of this project is to investigate spatial differences in activities across the site, and the second aim is to investigate the nature of resource exploitation, particularly the use of plants as fuel. The objective of the fieldwork in the 2013 season therefore was to collect a series of block samples for analysis by thin section micromorphology, which enables targeted examination of human activity at a very high resolution, and phytolith analysis. Samples were collected from middens across the site. The sampling strategy was guided by discussions with excavation supervisors Dave Reay and Dan Lee from ORCA/UHI and Dr Hugo Anderson-Whymark, and site director Nick Card. We targeted areas with good preservation of microstratigraphy. At the macroscale alternating ashy grey and orange lenses could be seen, containing charcoal fleks and shell fragments, which are ideal for this type of analysis. 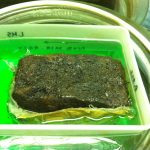 process twelve samples to get full coverage of the sequences under study. Sub-samples from all of the blocks were collected for phytolith analysis before sending the blocks to Earthslides (Cambridge, UK), where they are currently being processed into thin sections. This process takes around three months and it is estimated that they will be ready for analysis by December 2013.

The fieldwork was a great success, and was covered in the excavation blog here: http://www.orkneyjar.com/archaeology/nessofbrodgar/2013/08/dig-diary-monday-august-5-2013/

I am very grateful for the funding from the Society of Antiquaries of Scotland, which covered the costs of fieldwork and processing of the micromorphology samples. Without this generous support this pilot study would have been impossible. A short report on the fieldwork has also been submitted to Discovery and Excavation in Scotland.