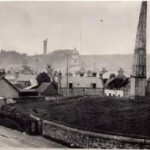 Ground penetrating radar survey, commissioned by Dingwall History Society, was undertaken by OJT Surveys at the Cromartie Memorial Car Park, the proposed site of Dingwall’s Viking assembly mound or thing, which is an important type of early medieval legal assembly. Prior to 1947 the site was the location of a large earth mound, historically identified by the Dingwall History Society as having been known in the early 16th century as the Moothill (‘hill of assembly’) of Dingwall and which had been subsequently adapted in 1714 to be the burial site of the First Earl of Cromartie. The survey was aimed at assessing the car park and the immediate environs for buried archaeological remains relating to the historic mound, its use as a medieval assembly site and Dingwall’s historic environment more generally. This formed part of the wider research and community project seeking to address key issues as to the character and origins of Dingwall’s Viking heritage, thought to have begun in the 10th-11th century, but conceivably at an earlier date. The project also incorporated a resistance survey at the neighbouring site of St Clement’s old parish church, a survey which was supported by Highland Council. 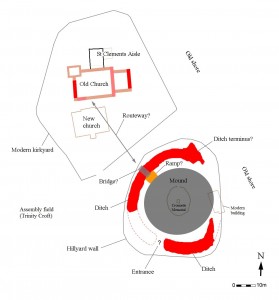 A timeslice area survey was undertaken across the car park interior and individual profiles were taken at several trajectories over the site and adjacent Church Street. Key findings included the identification of a possible ditch surrounding the mound; indications of a route-way connecting the church and mound; and considerable disturbance from post-medieval buildings particularly on the south side of the car park. A possible ditch approximately 5m wide and 2m deep was identified on the north, west and south side of the mound’s historic footprint. Truncation of the site from modern services, a road way and post-medieval buildings had apparently damaged earlier deposits on the south and south-west side of the mound. Anomalies probably relating to Victorian trenching at the mound in 1875 were also noted around the centre and south side of the site. Foundations of an enclosure wall demolished c.1950 were also traced.

A topographic survey of the site is planned for early 2012, which will further inform the radar survey and produce a detailed record of the site’s current condition. The project hopes to undertake excavations to test the veracity of the geophysics results pending consent from the Highland Council and present Earl of Cromartie.

Sincere thanks are expressed to the Society’s research committee for grant aiding the project and to Dr Barbara Crawford for providing a positive quote for the project’s press release. Similarly sincere thanks are extended to the Strathmartine Trust, the Hunter Trust and the Russell Trust for their grant aiding of the project. Special thanks also to the Highland Council Members for granting exclusive access to the car park for the purposes of survey. Specific thanks also to Liz Cowie (Highland Council) and the THING Project partners for support and advice and to members of the local community for helping with the fieldwork.