The archival work funded by a Gunning Jubilee Gift grant allowed me to explore documents deposited in the National Records of Scotland that shine a light on disputes involving the minister of the Midlothian parish of Crichton, Gideon Penman, his backers and a group of highly organised and ambitious godly laymen and women who opposed him. This is the first detailed assessment of disputes in a rural parish in early-modern Scotland and uncovers the deep and multifaceted relationships between local landowners and the parish ministry. 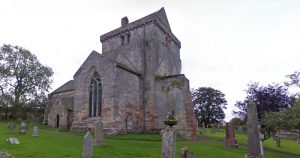 Research funded by the Gunning Jubilee Gift grant uncovered a decade of disputes in Crichton over the payment of teinds that have hitherto remained hidden. Teinds were levied on landholders and their tenants as a way to fund the ministry. Over the years, these funds had been appropriated and many lay in the hands of laymen and women. Ecclesiastical court records are usually silent about these disputes. Looking into civil court cases however, reveals how Gideon Penman was involved in litigation with his neighbours in Crichton on several occasions in the 1640s. In 1642, tenants of one notable landowner refused to pay him money towards his stipend. Documents in the National Records of Scotland also reveal bickering between local landowners over other tracts of land – some of these disputes became particularly ugly.

These disputes came to a head following the English invasion in 1650. The Kirk of Scotland shattered into two competing groups: Protesters, who wanted less cooperation with Charles II, and Resolutioners, who were willing to countenance forgiving former royalists in order to combat the Cromwellian invaders. Crichton, with its powerful and already fractious landowners, splintered across party lines. This burst into public view in 1655, when members of the parish kirk session confronted one another on the street. Penman lamented that he couldn’t control their passions while engineering to remove some of his own opponents from positions on the session. Penman’s actions were the starter’s pistol in a race against Crichton’s small, but influential, group of Protesters. 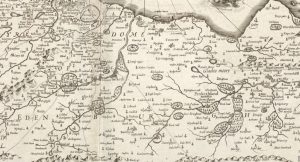 Pont, A new description of the shyres Lothian

Penman’s Protester opponents claimed he was actively trying to take advantage of the split in order to obtain more money for his stipend. They complained to the local presbytery, attacked the minister openly while he was preaching and, at one stage, allegedly tried to steal the session book from his house in protest. During this time, they overwhelmingly refused to pay his stipend and attempted to install an assistant minister who was friendly to their cause.

Critically, the work funded by the Gunning Jubilee Gift grant revealed how the campaign against Penman involved a rich arsenal of legal weapons. This went far beyond arguments in front of the local ecclesiastical courts but encompassed a range of civil law courts, too. Penman’s opponents applied pressure to their minister by fighting him on multiple fronts. The published diary of Andrew Hay of Craignethan shows how this network extended to include some of the most prominent godly layfolk in the country – Sir John Cheislie, Elizabeth Johnston (daughter to the infamous Archibald Johnston of Wariston) and others. At one stage, the English government attempted to intervene by telling the Protesters that their tactics against Penman were too aggressive. This was a highly organised, legally-literate group of agitators who held national importance. Their collective resources, influence and ire were directed against the minister of Crichton.

The documents in the National Records of Scotland also provide an indication of how Penman responded to this threat. First, he entered into a bond with his brother – the minister of nearby Cockpen – to provide him with money to fund his various legal battles. Penman also acted as a surety for other local magnates in their financial transactions, serving to secure his relationships with them at such a difficult time. By the time of the Restoration, as the tables turned against the Protesters, Penman’s backers petitioned Parliament on the minister’s behalf to sue his opponents and obtain access to his stipend once again.

Penman became infamous later in his life as one of the only ministers in early-modern Scotland to be accused – and probably acquitted – of witchcraft in the late 1670s. However, Penman’s importance to historians of early-modern Scotland is far greater than the stories of his eventual demise alone.

First, Penman’s case reminds us that understanding the geography of a parish – its layout, the composition of its landowners and interest groups – is key to understanding the ways that ministers performed their jobs. We cannot appreciate the complexity of religious life in early modern Scotland without assessing the local context in which it took place. The fractiousness of the 1650s may well sit on the foundations of much longer-standing disputes.

Second, Penman’s case reveals how historians need to look beyond the ecclesiastical archive to understand parish disputes more fully. Reading records from civil jurisdictions as well as ecclesiastical courts provides a better view of the ways in which ministers and their congregations related to one another. Ministers and laymen and women were often highly litigious, protective of their rights and customs and very willing to take these disputes public. This meant that seemingly ecclesiastical conflicts could be fought on multiple fronts. In the case of the parish of Crichton, these legal battles could be of national significance.