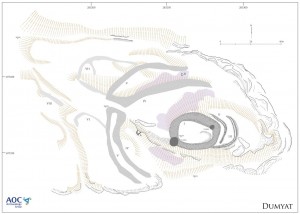 The site occupies a craggy buttress with commanding views over the hillfoots area and the Forth plain to the south and making use of the naturally defensive location formed by cliffs and gullies to the N, E and S. The central area of the site comprises a dun-like enclosure (I) comprising a substantial rubble wall, up to 4m thick in places and sub-oval in plan. No facing stones were obvious and the position of the entrance is not apparent, though the RCAHMS are probably correct in estimating that this was located in the SW area. The interior of enclosure I is largely featureless, though a crescentic depression in the SE area could represent the remains of a building. Two walkers cairns have been constructed on the rampart, one in the SW and a second in the NE; the latter is not marked on the RCAHMS plan of 1963 and as such has probably been built since then.

To the E of enclosure I, two light earthworks (II and III) curve across the promontory. The innermost of these, II, is only around 1m across and appears to respect the curve of enclosure I, suggesting contemporaneity (or, as RCAHMS suggest, may be attributable to robbing of the facing stones), but earthwork III may predate both. The relationship between enclosure I and earthwork III is not clear, but it is possible that I overlies III, which may have originally enclosed a larger area on the summit of the ridge. Vitrified material was observed both within the rubble of enclosure I and in the rubble spreads to the NW of I.

The outer areas of the fort are defined by two outworks, IV and V. The chronological position of these defences is uncertain, and the merging of rubble from both around the entrance area means that they cannot be separated sequentially from one another. The innermost wall, IV, is slightly thicker, averaging between 3 and 4m across; in one area in the SW outer face of the southern rampart, a few possible displaced facing stones were observed, though elsewhere the rampart is entirely ruinous. The outermost rampart, V, is of very similar composition; vitrified material was observed in several places in both ramparts. The outworks are conjoined at the entrance area, and although they are very ruinous it seems probable that they were linked, forming an entrance passage leading to the interior. Excavation would be required in order to demonstrate a sequence of construction.

Outside the ramparts, to the W, lighter walls have been constructed (VI and VII), visible and turf-covered banks forming a series of enclosures. It is likely that these post-date the fort although a ruinous bank, VIII, may have helped to define the route into the site via a natural gully leading up the hill.

Two small structures, perhaps sheilings or shelters have been constructed from the ruins of the ramparts. The first, A, is little more than an arc of stones built against the bedrock outcrop to the W of the fort while B is a small circular cell dug into the rubble collapse of rampart IV.