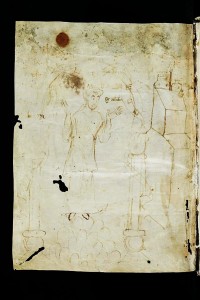 I arrived on 9th Sept 2014 and drove straight to Stein am Rhein where I had accommodation for the first two nights. The next day I visited the (almost) island of Rheichenau just over the border in Germany on Lake Constance. This was to experience the place that became one of the main early centres of Irish monasticism in the area, where one of the monks arrived with what is now the oldest version of the longer recension of Adomnán’s Life of St Columba, in his book satchel.  This had been copied in the Iona scriptorium shortly after the author died in 704, and then brought to Rheichenau.   Little now remains of the original Carolingian monastery on this tiny area of land, replaced in the 11th century by an impressive Munster church. The manuscript is now in the Stadtsbibliotek in Schaffhausen, just over the border in Switzerland.

From here I moved on to St Gallen, a 1 hour drive east, to keep my appointment at the Stiftsbibliothek there, to spend almost the whole day with the later, shorter recension copy of the Life (Cod. Sang. 555: Vita sancti Columbae ) which has the full page image of St Columba on the last page, the only image in the book.  The abbey here was founded by St Gall, a disciple of St Columbanus (little Columba) who was evangelising in Francia and Allemania around 600, having travelled from Bangor in Ireland. This strong Irish connection with the Cisalpine area persisted for centuries, with a wave of refugees from Viking raids in the early 800s following the initial missionaries.

The copy of the manuscript with the image of St Columba was produced at St Gallen by Carolingian monks around AD875. It features in a number of medieval catalogues of the St Gallen monastic library, which shows that the interest in Columba continued here long after the direct Irish connection ended. This was renowned as the finest library of the medieval period, and became known as the “reading room of Europe”. This houses the largest collection of early medieval Irish religious manuscripts, about 30, outside of Ireland. 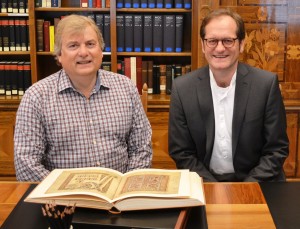 I had arranged access to the manuscript with Dr Cornel Dora, Director of the Stiftsbibliothek, who met me when I arrived. We were able to spend a little time discussing Columba, Iona and the significance of the image in Cod. Sang. 555. I presented him with a copy of my new HS Iona Abbey guidebook, which is now in the St Gallen research library. I made him aware that my visit was only possible thanks to the grant from the SAS.

It was a great privilege to get my cotton-gloved hands on this unique book. I learnt a great deal from my visit, which I could not have learnt from examination of the online reproduction of this very faded image, being able to study the original under magnification, and to discuss it with Dr Dora. Of key significance is not only that this is the oldest surviving image of Columba, but also that this includes the only image of Insular church-shaped reliquaries in their liturgical context.

The other chief outcomes from my research visit are: 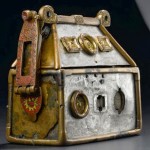 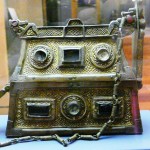 1. The saint occupies the same architectural space as the lectern/relic stand.

2.  On that stand are two Insular small church-shaped reliquaries, one small and one larger.  One is face-on to the viewer, while the smaller one is three-quarters on, revealing a gable end.

3. The larger one has a three-over-three arrangement of applied gilded mounts (three being symbolic of the Trinity), similar to the Monymusk and Bologna Reliquaries.

4. There is a possible, indecipherable faded line of text added above the head of the saint.

5. The drawing does not necessarily form part of the original manuscript, and, stylistically, could have been added as much as a century after its production, although this is by no means certain.