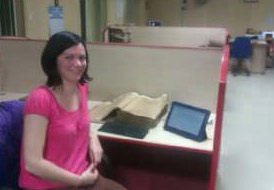 The purpose of this trip was to locate the original correspondence of the East India Company’s Baramahal Collectors between 1792 and 1799. The purpose of my research is to uncover their motivations and ideas for the changes they sought to make to the existing tenurial arrangements. More specifically, to interrogate whether, as historian Martha McLaren contends, that there was a “Scottish school of thought” in Indian governance.

Although the original letters could not be found, bound copies were available in manuscript form. The volume titles are the headings under which Alexander Read, the Superintendent of the districts, hoped to draw all the information gathered over their years as Collectors in to a useable ‘system’ of management for other Collectors. The majority of these volumes exist in the India Office Records collection (IOR) in the British Library. However, two significant volumes that shed light on Read’s motivations in particular seem never have been typed up and printed as they do not appear in the IOR catalogues and I have never come across them before. These are titled Arrangements and Settlement.

The volume Arrangements is a collection of instructions and reports relating to the survey which these Collectors carried out in the districts they were in charge of. It contains Read’s initial instructions to his Assistant Collectors and copies of forms that they should fill in to create a full account of their districts. The survey is discussed and reported on in other revenue papers at the time, such as reports to the Madras Board of Revenue, but many of the instructions to the Assistant Collectors and their responses are not available elsewhere. Most importantly, Read’s exhortations to his Assistants, as far as I know, are only available in this volume. In these he lays out clearly his motivations and connects them back to John Sinclair’s work on the Statistical Account and the Board of Agriculture. This is some of the most important material I have found for my PhD.

The volume, Settlement, is Read’s final report to the Board which I have also never found anywhere else, nor have I seen other historians of the Ryotwari system mention its contents. Perhaps it was never transmitted but remained among Read’s papers? In it he frankly lays out his preference for small farms and the value he saw in a survey, and thus why he ignored much of the Board’s advice on creating a Permanent Settlement, following Cornwallis’s policy in Bengal. He also admits that they may have gone too far in changes they sought to make to the social fabric of the Baramahal and Salem and hampered ‘improvement’ rather than promoting it. Several historians note that Read seemed to doubt his system towards the end, but this shows conclusively that he was well aware of its failings.

These findings however, do not negate the fact that much of their correspondence is about the detail of produce, crop rotations, traditional ways of calculating land tax, information about social structure and such like, much of which they continued to use. A full and specific outline of their motivations remains elusive, aside from Read’s quotes from the Board of Agriculture. Since it remains unclear, it is impossible to rule out that their early life in a changing Scotland (c. 1760-1780) influenced the policies. What is clear, however, is their deliberate attempt to create a system of tenure, focused on ‘improvement’, regardless of custom, and the two volumes I was able to access in Chennai have indeed contributed substantially to my hypothesis.