Excavation and survey of Early Neolithic chambered cairn on Islay 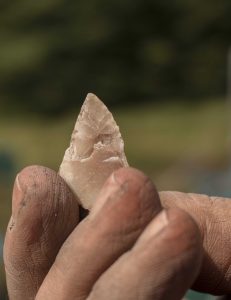 Society of Antiquaries of Scotland provided crucial funding in the last season of excavation and survey of the Clyde-type chambered cairn Slochd Measach, locally better known as Giant’s Grave, near Neraebolls on the Rhinns of Islay. The cairn is, nowadays, hidden deep in the forestry plantation with no easy access route. With the Society’s help we were for the first time able to run three week excavation and, thus, discover much more about the history of the monument and its environs and present the site to the community and the visitors. Having evaluated the site and conducted the initial geophysical survey in 2015, in 2016 we excavated two trenches to establish the phasing and the way the cairn and the chamber were constructed (Trenches 1 and 3). In 2017 we opened two trenches at the front of the cairn. Trench 2 was located in the forecourt and Trench 4 targeted previously unseen southeast end of the largely missing façade. Finally, Trench 5 was placed c.20m to the south in order to investigate a suite of high resistance anomalies in this area.

Trench 2 revealed a sequence of dismantlement/collapse of the façade and probable blocking of the entrance of the chamber. The façade was originally of ‘post and panel’ construction with toppled monoliths and dry stone walling material present in the trench. There is a fascinating choreography of two local geologies at play here. Greenish metagabbro megaliths were used exclusively for the construction of the chamber and the remaining portal stone, which stood over 3m tall, but is now leaning at 45°. The portals, which were presumably a pair, were flanked by much smaller entrance jamb stones, made from pinkish cyenatic gneiss. We found monoliths of both types of stone in the area along the line of the façade, suggesting that they might have been combined in its construction resulting in both imposing and dazzling appearance. 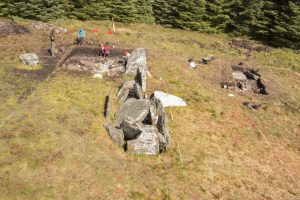 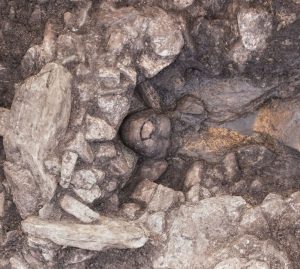 BA pot in the cist prior to lifting

Trench 4 succeeded in locating previously unseen southeast end of the façade at its meeting point with the kerb wall of the cairn. A stone socket for the end façade stone was recorded and partly excavated. The façade is now known to have been slightly concave rather than straight as previously thought. The kerb wall was overlying earlier stone structure, which represents either an earlier cairn or a platform for the construction of the Clyde cairn. Two Bronze Age features were excavated. A small niche abutted the outside face of the kerb wall and contained remains of two mostly complete but broken up ceramic vessels. The second was a roughly built cist, which was partly overlying the kerb wall having been made by rearranging some of the underlying cairn material. This was lined with small stones forming an oval space, 0.5m by 0.3m, containing a broken pot, which still held its shape and was lying on its side at one end of the cist. The source of the high resistance in Trench 5 was a layer of rubble below the peat, which probably represents cairn material that tumbled down the slope. The rubble was overlying a layer of buried soil in which a leaf-shaped arrowhead was found. Post-excavation analyses are now under way including a detailed dating programme incorporating Bayesian modelling representative of the entire stratigraphic sequence.

The excavation was coordinated in conjunction with the Islay Archaeology Week organised by Islay Heritage including three guided site tours attended by more than sixty people. Over the three years of the project, more than two hundred people visited the site including over ninety children from all four primary schools on Islay, which, considering the site is an hour and a half long walk through the forest from the nearest public road, is a great achievement for both the youngsters and those young at heart. 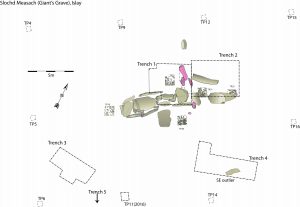