Research into Gypsy Traveller objects in the Highland Folk Museum 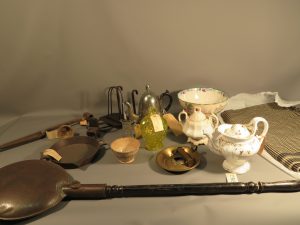 I am very grateful to the Society of Antiquaries of Scotland for the funding to carry out an “excavation” of Naken chaetrie within the Am Fasgadh museum store at the Highland Folk Museum in Newtonmore. As Nakens often worked with vulnerable materials (wood, heather, horn, silver and tin) the museum store provides an ideal alternative excavation site where it has been possible to examine this assemblage as a distinct group for the first time. Naken chaetrie has been examined alongside the museum archives and brought together with Naken memoirs as well as with members of the contemporary Naken community in order to better understand its significance.

Culturally distinct chaetrie
Among the culturally specific Naken items in the collection is a set of skivers, or shawl clasps, used to secure a shawl which held a baby on a woman’s back.[i] These skivers were made for the museum as an example (commissioned by I.F. Grant, founder of the Highland Folk Museum in the 1940s), but have been very helpful in identifying three original examples within the collections of National Museums Scotland.

Movement and trading of goods
Grant was aware of their symbiotic relationship with the settled Highland population, including in the movement and trade of goods. She wrote, ‘I was always told that the [Nakens] did a great trade in colourful pottery bowls from Lowland potteries exchanged for rabbit skins’.[ii] Although none of the pottery she collected is documented as being traded in this way, it is highly likely that this is how much of the lowland pottery in the collections made it into Highland homes.

According to David Donaldson, ‘what they would do was drive the horses down once a year from Wick and from Alness and Dingwall, down to Glasgow and then down to Appleby, and they’d sell them. And then after they’d sold all the horses, with the money that they would gain, they would buy up china in Appleby and then they would take the china up north and they’d sell it round the cottages and crofts because no one could get china’.[iii] Essie Stewart also recalls this trade: ‘my [natural] mother’s mother was a Williamson, a Traveller woman, whose family lived in Tain. They had a ragstore there. They were the “Bowlies” Williamsons – settled Travellers – they took in rags, rabbit skins, woollens, in exchange for china ornaments and things that other Travellers, on the road, would sell to crofters all over Sutherland’.[iv]

Made for trade
Essie Stewart, a granddaughter of Naken tinsmith, Alidh Dall, was able to identify examples of hand-worked tin in the collections, while others shared memories of family members making some of these items. Michelle Foy recalled that her ‘Grandad, Old Teddy Foy made pegs outside the campfire’ and Margaret McKenzie and others pointed out the plaited lip baskets they associate with Naken basket-makers.[vi]

Demonstrations by James Williamson (Naken basket-maker) and Bill Steele (horn-worker) have provided useful insights into processes. Williamson’s demonstration, alongside oral evidence shared by participants who visited the store, has expanded the basket-types associated with Nakens beyond frame-baskets to stake-and-strand baskets. While some of the occupations within the literature (of Gypsyologists and Nakens) are unrepresented in museum, an excavation of the store has turned up an object which evidences an occupation or activity for which no other mention has been found so far. This is an implement for scraping sap from trees (this may have been gathered for personal use, for use in the manufacture of other items, or for direct sale, including healing, lighting fuel, soap, or glue).

Mending and recycling
There are two mended teapots in the Highland Folk Museum collection. Among the Naken occupations listed by Duncan Williamson is the Cheeny Feeker – ‘a mender of Delph or porcelain’.[vii] One of these teapots belonged to the Duchess of Sutherland’s and while the contract to mend was probably not made directly with the duchess, this gives an insight into the trade that was done by Nakens across all social strata. A silver brooch and some other small pieces of jewellery in the collection also evidence Naken skills in silver-working in the nineteenth century.

Second-hand trade: dumps, scrapyards, door-to-door trade and antique emporiums
Successive curators of the Highland Folk Museum found Naken second-hand dealers invaluable in developing their collections. For example, close to a quarter of the Highland jewellery collected by Grant was bought from Nakens. Three Naken families, the Williamsons, Rileys and Yates were important collections sources of both Grant and her successor, George ‘Taffy’ Davidson. These families ran a dump, scrapyard and antique shop respectively. In 1974 Davidson wrote, ‘Without George [Williamson] and his relations I would have had little to show in the extended farming shed. As it is, it is full and the patron is Tom Williamson, a nephew of George’.[viii]

Nakens have had key roles not just in providing valuable services in making, trading, mending, and recycling goods, but also in the shaping of this museum collection. While their motivations were different, both the museum and Nakens have valued and repurposed old things, and curators at the Highland Folk Museum often looked to Nakens for the supply of older items, preserved by Nakens within their various occupations.