Geophysical survey of the Roman fort at Duntocher

A Society grant enabled the geophysical survey of a Roman fort on the Antonine Wall. 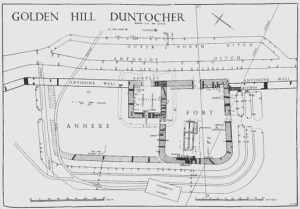 The geophysical survey at Golden Hill, Duntocher, was carried out by the applicant and Joss Durnam (Rathmell Archaeology) with the assistance of students from Archaeology at Glasgow on August 17-19, 2016. An area of 13,500m2 within and adjacent to the fort was surveyed with a dual sensor Bartington Grad 601 gradiometer and 8,400 m2   with a Geoscan RM15 resistivity meter in a twin probe array. The results were processed with Geoplot 3.1 yielding grey-scale graphics.

The main aim of the survey was to check the plan of the fort (Fig. 1) created by Anne Robertson on the basis of her excavations which took the form of numerous small trenches and sections. Comparing that plan with the results of the magnetic survey (Fig. 2), the following points emerge: 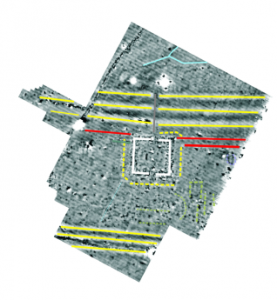 Fig. 2 Grey-scale graphic of the magnetic survey data with annotation. Ditches in yellow, AW in red and other features in green.

The corresponding results of resistivity survey (Fig. 3) confirm the presence of a broadened stretch of the AW in the fort and of the rectangular structure (A in Fig. 3) within the fort. Beyond that, however, significant discrepancies with Robertson’s plan are apparent: 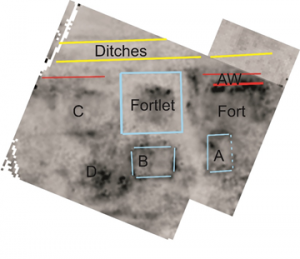 Fig. 3 Grey-scale graphic of the resistivity survey data with annotation.

Overall, the results are startling in the way they challenge several aspects of Robertson’s plan of the fort/fortlet/annexe complex at Golden Hill. As further scrutiny of the data is underway, it is already apparent that follow-up survey would be highly desirable to define better, for example, structures A, B and C.   The Society of Antiquaries of Scotland is warmly thanked for making possible this short but very effective survey in 2016.

Robertson A.S., 1957, An Antonine Fort: an account of excavations carried out on the Antonine Wall and fort on Golden Hill Duntocher, Dunbartonshire, Edinburgh.