The Society’s grant contributed to macrofossil analysis and radiocarbon dating costs for the project. 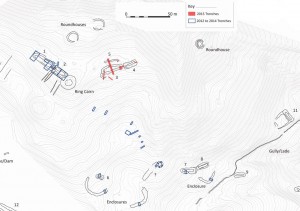 The Glenshee Archaeology Project (GAP) was established with a pilot year in 2012, funded by the Cairngorms National Park, the Drumderg Windfarm Community Fund, and the Society of Antiquaries of Scotland with the aim of assessing the potential for a programme of archaeological research through community engagement focusing on a cluster of proposed early-medieval longhouses at the site of Lair in Glenshee. A two-year programme of excavation was delivered over 2013-2014, supported by the Gannochy Trust, Historic Environment Scotland, and the Hunter Archaeological and Historical Trust. This, carried out topographical and geophysical survey and excavated over 20 trenches across five long houses and associated features, such as clearance cairns and linear boundaries. This showed that at least 2 of the longhouses dated to the 7-9th centuries AD, and a programme of pollen study revealed that the contemporary landscape was almost treeless, and that the inhabitants of the longhouse were growing crops, including wheat or oats, barley and rye.  A further programme of work over 2015-17, funded by the Gannochy Trust, the Society of Antiquaries of Scotland, and Historic Scotland, will aim to excavate a remaining complex of longhouses as yet unexcavated, while mapping field systems and drove routes from a variety of aerial photographic sources. The project was developed by Perth and Kinross Heritage Trust (PKHT) and delivered in partnership with Northlight Heritage as a key event in the annual Perth & Kinross Archaeology Month (PKAM) programme.

The overall project aims are to add some much needed depth to our understanding of the so-called Pitcarmick-type buildings of north-east Perthshire. While many of these elongated turf and timber houses of the late first millennium have been identified in this upland area, initially by the Royal Commission of Ancient & Historical Monuments Scotland during surveys in the late 1980’s (RCAHMS 1990), their overall distribution and dating is still poorly understood. In addition to this very few have been excavated to date, the notable exception being the site-type itself at Pitcarmick (Barrett & Downes 1993 & 1994, Carver et al. 2013). These turf and timber structures are particularly important given, with the exception of Viking settlement in the Outer Isles, early medieval buildings are rarely found elsewhere in Scotland.

The site of Lair is located in Glenshee, Perth and Kinross (NGR: NO 139 637) on terraces of a south facing slope, at a height of between c 360 and 380 m OD, with the Shee Water running c.600m to the east. Like Pitcarmick itself, the site comprises a relatively dispersed settlement of longhouses near to an earlier, probably Bronze Age, roundhouse settlement. All of the above sites are located around a ring-cairn of likely early Bronze Age date. The results of the pilot season in 2012 (Strachan & Sneddon 2012), which focused on one of the long houses, and the excavations 2013-14 (Strachan & Sneddon 2013 and 2014), which focussed on the longhouse adjacent to that excavated in 2012 are available online at the project website (www.glenshee-archaeology-co.uk). 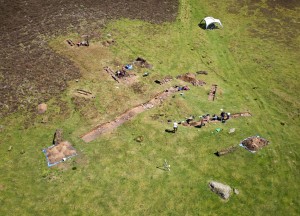 An aerial view showing the scale of the longhouse group and 2015 trenches (photo: Eddie Martin).

In June 2015 the fourth season of excavation saw a series of 6 evaluation trenches over a complex of at least three adjacent longhouses (Fig 1, structures 3-5), located to the east of the ring cairn, a focal feature in the landscape and both prehistoric and later features in the immediate area.

The complex exhibits many of the characteristics of the classic ‘Pitcarmick type’  with rounded ends, an external oval enclosure attached to an external wall and signs of at least some slightly sunken internal areas. The 6 trenches aimed to evaluate the character and preservation of the building walls and internal areas. One trench also investigated the oval enclosure attached to the SW side of the main longhouse and the external area to the south of the group.

The walls of the structures appeared, in general, to be constructed from a 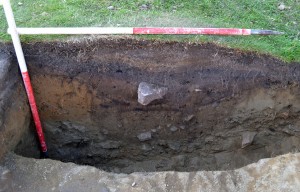 Section through a large pit within an annexe of the longhouse.

combination of turf and stone although well preserved turf layers in the wall of the northern most building appear to show a wall composed of an inner and outer skin of turf with an earthen core.  A series of internal features and deposits were also uncovered including substantial layers of stone work in the centre of one of the buildings, post-holes and burnt layers. One of the most distinctive features encountered was a substantial pit in the centre of the oval enclosure containing a series of distinctive fills, including turf layers. Artefacts recovered included fragments of flint, corroded iron pieces, small pottery fragments and a spindle whorl with incised markings. A series of samples have been recovered for radiocarbon dating which will improve our understanding of this complex, the Lair group, and so the early medieval turf longhouses in the area as a whole. 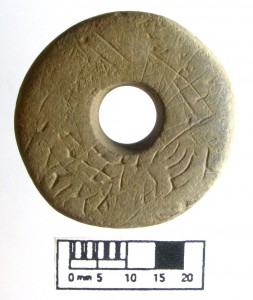 The incised spindle whorl found within the longhouse in 2015.

In 2015, the project is planning further open area excavation of the longhouse complex containing structures 3-5 with a view to better understanding their function and development.