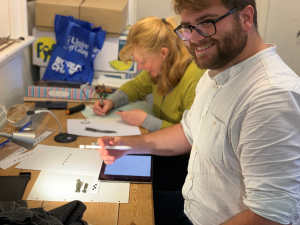 Introduction
This artefact-based study is concerned with a distinctive group of base-metal strap-fittings, which although of Insular manufacture were adopted by Vikings in the Irish Sea area, becoming a cultural marker for Hiberno-Scandinavian identity. Although the group has a broad chronological range and a variety of functions, it is linked by a number of stylistic features, most notably incised concentric circles set around distinctive boss-capped rivets (which in some cases are reduced to a central perforation or indentation), double sided strap-ends, zoomorphic terminals and panels of interlace. While a number of group members have been recovered from excavations, the rise of metal-detecting has resulted in a large increase of discoveries, making a review of the series timely.

There are now over one hundred strap-fittings belonging to this series, identified by their bossed rivets or boss-derived ornamental features. The majority of these finds come from Ireland, but there is also a substantial corpus of 22 fittings from Scotland and a closely linked group from the Isle of Man, which we have included as it was part of the Hebridean polity during the period of study. There are also a number of outliers from Wales, the Danelaw and Norway. Although they display all the hallmarks of Insular craftsmanship, both in their bronze composition and stylistic repertoire, they are frequently recovered from Norse contexts, such as pagan graves and urban or proto-urban contexts, including beach markets, suggesting that they were a significant component of Hiberno-Scandinavian identity in the ninth and tenth centuries.

Project Research Aims and Methodological Approach
This project aims to build a complete illustrated catalogue of the Scottish and Manx corpuses as a strong starting point for a comprehensive analysis of this distinctive group of artefacts. It is hoped that this analysis will both complement studies of contemporary material, as well as aid our efforts to understand the formation of Hiberno-Norse identity. While over half of the Scottish and Manx strap-fittings have been published over the last century, variations in illustration techniques and photographic quality can make a comparative analysis of the group difficult. Several of the objects were illustrated before conservation, or fail to record important details such as thickness or the object’s reverse face. 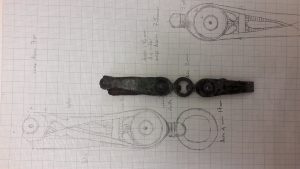 In order to achieve these project aims it was imperative to view the objects in person so that a consistent record of their simple forms but complex ornamentation could be created, and it was for these museum visits that we sought the aid of the Society of Antiquaries of Scotland. The methodology is at its core traditional; a combination of photography and conventional 2:1 illustration. However in order to maximise the value of our visits, we have experimented with a hybrid approach which digitally combines photography and illustration using a tablet and stylus. This has proven to be a very accurate and speedy illustration tool, with different stylus modes (stippling, tonal shading etc) allowing for the recording of really subtle observations to great effect. More importantly, the value of having two sets of eyes with different skilled backgrounds but both familiar with the object group, has been immense, and this project has already proven how valuable it is to examine the objects in person.

Museum Visits
Thus far we have visited the Kilmartin Museum, the National Museum of Scotland, Elgin Museum and the Manx Museum, recording 20 objects from our group. Fieldwork is still ongoing, with several more visits planned for early 2019. While research is ongoing, we are pleased to report on several exciting discoveries to date. We have confirmed the important Knoc y Doonee group as belonging to the corpus and have now fully recorded it. The only previous record of this very fine strap-assembly was a simple sketch totally lacking any representation of the unique incised ornament which still survives on all the fittings. A better understanding of the Knock y Doonee assemblage brings with it insights into the development of the group as a whole. We have identified late Roman precursors to the form of all the bridle fittings in this series, namely Kiloran Bay, Balladoole and Knoc y Doonee. The meaning of this has yet to be fully explored, but this conscious copying of classical bridle sets is also mirrored within Scandinavia, as evidenced by the bridle set within the Gokstad ship burial, and may reflect an elite Viking aspiration to associate themselves with Roman cavalry. We have identified and recorded several previously unpublished finds, such as the three strap-ends from Clarkly Hill, Moray, together with a recent find from Arbory, Isle of Man, and a strap-end from Crail, Fife. We have also conclusively identified the Cnoc nan Gall strap-end as belonging to this series and recorded its previously unillustrated ornament of interlace and linked lozenges, so typical of the group.

Impact of Funding and Future Research
We are delighted that a Gunning Jubilee Award is enabling us to collaboratively create a Scottish corpus of this important group of Hiberno-Scandinavian strap-fittings, which we aim to publish next year. By funding our travel and subsistence, we can study these objects first hand in the various locations in which they are housed, as well as illustrate them for publication. Moreover, we are finding it extremely worthwhile to examine and record the finds anew, particularly with our joint understanding of the series as a whole. Future research will see us expand on the base we are currently creating by studying the Irish and English material, thereby completing the corpus and furthering our understanding of Viking identities in Britain and Ireland.

Acknowledgements
Our thanks go not only to the Society for supporting our research and funding our travel to a number of museums across Scotland and to the Isle of Man, but also to the curators at those museums who have been so helpful in allowing access to the finds, namely Sharon Webb, Jim Wilson, Allison Fox, Janet Trythall, and Heather Townsend. We would also like to thank Stephen Harrison and James Graham-Campbell for their support and helpful comments at different stages of this project over the years.

References
Paterson, C 2001 ‘Insular belt-fittings from the Pagan Norse Graves of Scotland: a reappraisal in the light of scientific and stylistic analysis’, in Redknap, M, Edwards, N, Youngs, S, Lane, A & and Knight, J (eds), Pattern and Purpose in Insular Art. Proceedings of the fourth IIAC, Cardiff 1998, 125 -132. Oxford.