“In your chain of friends”

The material culture of displacement in WWII Lapland and Scotland

In August 2017 I travelled to Rovaniemi, Finland and to the collections of the Provincial Museum of Lapland, held in the strikingly elegant Arktikum heritage park which occupies the site of a former logging station on the banks of the Kemijoki river. Situated on the Arctic Circle, Rovaniemi is the capital of Finnish Lapland and has in recent decades become with a flourish of international tourism , for better or worse, the ‘official’ home of Santa Claus.  However, perhaps less known is the role Rovaniemi played during WWII as a major base of German forces (Wehrmacht and Luftwaffe) operations in the Arctic, as well as the town’s almost complete destruction during the evacuation of Lapland in September 1944 as the Germans retreated to occupied Norway. My visit to the museum, made possible through a grant generously awarded by the Society of Antiquaries of Scotland’s ‘Gunning Jubilee Gift’, begins an initial phase of research focusing on the experiences of a Polish citizen, Franciszek (Frank) Wardzynski. Frank was displaced from his home in German occupied Warsaw, Poland in 1943 and transported to Rovaniemi where he worked as forced labourer in the German auxiliary unit Organisation Todt.

As the German army retreated in 1944, Frank escaped Lapland and travelled to neutral Sweden via an internment camp for Finns evacuated from Lapland and non-Finnish nationals displaced by war. From here he was able to travel to the UK and join his fellow compatriots in the Polish Army based in Scotland. As with thousands of other Poles, Frank was reluctant to return to Poland for fear of political reprisals under the Soviet controlled government. With support from the post-war initiative of the Polish Resettlement Corp, Frank settled in Scotland, where he raised a family and contributed significantly with a long career in the NHS. 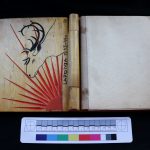 Inside cover of autograph booked with carved image of reindeer. Copyright Natasha Ferguson

The focus of this research is the material exploration of an autograph book and its contents carried by Frank throughout his time in Finland, Sweden, and eventual journey to Scotland. The pages of the book are filled with signatures, comments, songs, poems, sketches, and most poignantly sad farewells, in array of languages including Polish, Finnish, and English. A carving on the inner side of the birch wood cover colourfully depicts a reindeer lifting its head towards the horizon and rays of the midnight sun, with an inscription underneath reading, “Laponja 1943-44r FW”. This book, together with a handful of documents and photographs are all that survive of Frank’s journey across the far north of Europe.  In recognising the autograph book as a uniquely surviving piece of material culture my research will articulate a narrative of his experience as a displaced person in WWII Lapland and member of a growing post-war diaspora in Scotland. Together with ethnographic methodologies such as interviews and archive research, this project aims to achieve a better understanding of the historical and environmental context, as well as the network of social interactions which underpinned its creation.  It will ask: how was the book modified? What conditions did he experience? Where did he journey to? Who was asked to sign it? What meanings can be drawn from expressions of identity, both personal and political? How did his identity transform as his journey progressed? The autograph book therefore provides a valuable and rare insight into his experience of Lapland and the relationships he fostered on his journey to Scotland. 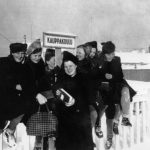 Students in Rovaniemi School of Commerce during mid-term in 1943-1944 (No.289:8578). Courtesy of the Provincial Museum of Lapland Photo Archive

Visiting the Provincial Museum of Lapland

In visiting the Provincial Museum of Lapland I had the opportunity to view and analyse comparative material and access archives relating to the daily lives of those living in Rovaniemi during WWII. It was also a valuable opportunity to create new networks with specialists in this area of research including museum professionals, archaeologists, and local historians.  On meeting curators Suvi Harju and Heidi Pelkonen, I was given a tour of the permanent galleries of the museum. This included an exhibition space dedicated to the German presence in Lapland from 1940 to the evacuation of civilians from Lapland in September 1944 and featured objects donated by local families, such as suitcases and travelling cooking utensils. As German forces retreated from Lapland they employed a scorched earth policy, leading to the total destruction of Rovaniemi. This is graphically highlighted by a large model of the town presenting Rovaniemi pre-1940 and its ruinous state after the 1944 evacuation (Mann and Jörgensen 2016). As Rovaniemi was rebuilt and developed in the post-war years only remnants of the town have survived, linked by traces of the original street plan. The model was therefore invaluable in orientating me with the historical terrain and to attempt a psychogeographic approach to exploring Frank’s experience of Rovaniemi, which had limited success due to time constraints. During the tour we discussed the 2015 temporary exhibition, ‘We Were Friends: Finnish-German Encounters in Lapland 1940-1944 (RML 2015), curated by Suvi Harju and focused on some of the objects and photographs displayed, including a pair of straw shoes given to a Soviet prisoner of war which acted as extra cover for their footwear during hard labour in winter; artefacts similar to the wooden shoes described by Frank in his recollection of the harsh conditions in Lapland.

As curator of the photographic archive, Suvi generously spent time guiding me through the museum’s archive and introduced me to the online resource, the Finnish Defence Forces Photograph Archive. Both resources were insightful, with the museum’s archive providing key images of foreign labourers possibly working within Organisation Todt; key buildings no longer existing such as the cinema, and the local women in Rovaniemi that may be represented in the autograph book. With an archaeological background, Heidi Pelkonen and I discussed in detail the materiality of the autograph book, exploring details of its composition, modification, and investigating features such as the Finnish makers stamp on the binding. 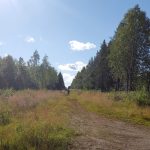 Walking the route of the old Arctic Highway outside Rovaniemi. Copyright Natasha Ferguson

During my short visit I was also introduced to local historian and museum volunteer, Kalevi Mikkonen who has spent decades identifying, researching, and surveying the remains of German military camps and installations, which cover a significant area of Rovaniemi’s surrounding landscape (Seitsonen and Herva 2011). Key to Kalevi’s research is recording sites in detail before they are destroyed by modern development. I was able to spend time with Kalevi as he gave me a tour of a selection of sites possibly linked to Frank’s work in Lapland, such as remnants of the Arctic road, a route Frank would have driven regularly when transporting supplies to the northerly hydro-electric dam in Jäniskoski. Unexpectedly, Kalevi also brought me to the site of the Organisation Todt and NSKK (mechanic and transport unit) workshops. This area is located close to the museum and is now a housing estate built directly after the barracks were demolished shortly after civilians began to return from the evacuation to southern Finland. Interestingly some features did survive which we were able to compare with historic photographs, such as patches of barbed wire, concrete building platforms, and even surviving tree lines. The ability to visit this area was an important experience and will inform future approaches to exploring the tangible features of this landscape, bringing me closer to understanding the living and working environment of Frank.

The opportunity to explore the collections and archives of the Provincial Museum of Lapland, and engage with the museum’s curatorial staff and volunteers has had a profound impact on my current research. This is not only due to the resources I was able to scrutinise, but importantly the ability to form new sustainable research networks. My initial contact with the museum curators was supported by colleagues working within the University of Helsinki’s project Lapland’s Dark Heritage. While in Lapland I was also fortunate enough to join the project team who were excavating a POW camp near Inari, a town approximately 250km north of Rovaniemi. As an area associated with some of the Polish entries featured in Frank’s autograph book it was a unique experience to spend time there as part of this research. Through this project I was able to strengthen links with the university research team, including ta doctoral researcher investigating the presence of Organisation Todt in Norway and Finland. Through links with the project my research was given national coverage as a main feature in the broadsheet newspaper Helsingin Sanomat. I have also been asked to contribute an article to the Finnish Lapland based heritage journal Raito, which will be published in the autumn 2018.

While this research will focus on the story of Frank and the autograph book as a powerful object of the materiality of displacement in WWII, I am also interested to explore other avenues of research related to the entries in the autograph book. Significant aspects highlighted by the autograph book include the gender roles reflected in the entries and the visibility of women during this period of Rovaniemi’s history. I continue to work closely with project partner, Dr Eerika Koskinen-Koivisto, University of Jyväskylä with plans to publish an article on this avenue of research in 2019. Further research will be required building on contacts with staff at the National Archive of Finland and the Military Museum of Finland, both located in Helskinki.

With thanks to Society of Antiquaries Scotland for awarding me a travel-grant to visit the Regional Museum of Lapland through the Gunning Jubilee Gift. Thanks to curators Suvi Harju, Heidi Pelkonen, and museum director Hannu Kotivuori for their time and hospitality. Thank you to local historian Kalevi Mikkonen for his generosity in sharing his knowledge of WWII Lapland. Special thanks are due to the Dark Lapland Project team, particularly Professor Suzie Thomas and Dr Eerika-Kovisto for their support and inviting me to their excavations in Inari. Finally, I am grateful to my grandmother, Mary Wardzynski for access to my grandfather’s archive and sharing her memories of him.