Radiocarbon dating has clarified the structure and dating of this important early stringed instrument. 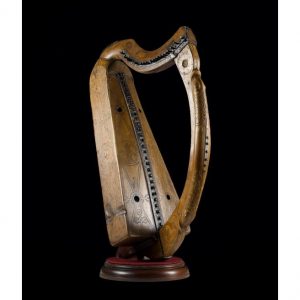 This project was undertaken to radiocarbon date the wooden timbers comprising the frame of the Queen Mary harp, or clarsach (National Museums Scotland H.LT1). It has generally been presumed that this artefact dates to the 15th century, however, recent research has prompted a reassessment of this date. Species identification of the forepillar and neck timbers, complementary to recent identification of the soundbox wood, was also undertaken to inform interpretation of the radiocarbon dating results. The monies awarded by the Society of Antiquaries of Scotland fully funded the wood sampling, radiocarbon dating, and woods identification, enabling us to accomplish all of our research objectives.

Identification of the neck and forepillar woods was undertaken by dendrochronologist Dr Anne Crone of AOC Archaeology Group, utilizing existing SEM images of samples prepared by Dr Ticca Ogilvie (formerly National Museums Scotland (NMS)), taken by Dr Lore Troalen (NMS). The neck wood was identified as belonging to the Maloideae subfamily, most likely Pyrus malus (apple) or Pyrus communis (pear). Identification of the forepillar wood was problematic with no clear match, however Carpinus betulus (European hornbeam) was identified as a likely candidate.

Wood sampling for radiocarbon dating was also undertaken by Dr Crone, with NMS conservator Charles Stable. The soundbox and neck samples were taken from locations accessed from inside the soundbox, and the forepillar sample was taken from a pre-existing area of exposed interior wood on that part of the harp. Samples of 10 mg+, consisting of small flakes and splinters, were removed with a scalpel.

Radiocarbon dating by accelerator mass spectrometry of the samples, pre-treated to α-cellulose, was conducted at Scottish Universities Environmental Research Centre (SUERC) by Dr Derek Hamilton and Professor Gordon Cook. The radiocarbon dating results are listed below.

Due to the shape of the calibration curve, the radiocarbon ages intersect it at more than one point, resulting in two possible age ranges and associated probabilities for each sample, as indicated in the table. A pre-existing CT scan of the harp was used to count annual growth rings beyond the position of each sample (soundbox: 13 yrs; neck: 18 yrs; forepillar: 5 yrs). Given the species and cuts of wood used, the outer edge of each timber may not be significantly beyond the worked surface of each piece, the timbers were likely used within a reasonably short period of time after felling, and it is unlikely that the harp was made from repurposed (i.e. older) wood. Adjusting the above calibrated dates for these considerations places the construction of the harp between the 2nd quarter of the 14th century and the 1st quarter of the 15th century. The results suggest that all parts of the frame were likely made at about the same time.

No other surviving historical clarsach has been analytically dated, so this project adds significantly to current understanding of these harps. Further, the radiocarbon dating reveals that the Queen Mary is the oldest dated extant European harp, and one of the oldest known European stringed instrument to survive in a largely unaltered and intact state (the 6th-century Trossingen lyre was unearthed intact). Musicians and musicologists will now be able to confidently place it in an accurate historical context, furthering their research and performance, thus enhancing the understanding of this harp and of historical clarsachs in general.