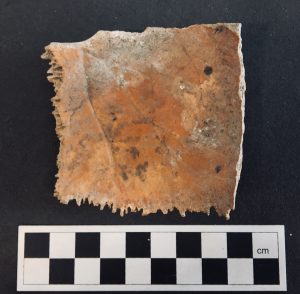 An Analysis of Faunal Assemblages from the Covesea Caves

The Covesea Caves are Later Prehistoric mortuary sites located on the north-east coast of Scotland. Previous excavations have revealed that the caves were the focus of funerary activity in the Late Bronze Age and Roman Iron Age. Although much work has been undertaken on the human remains from the Covesea Caves, there has been little attention given to the numerous faunal bones recovered from these sites. This is currently being rectified with my project, which gives the faunal assemblages their due through focused analysis of their taphonomic characteristics and composition.

As part of my current PhD research on the faunal remains from the Covesea Caves, I planned on undertaking comparative analysis between these and selected contexts of note. Thanks to generous funding from the Society of Antiquaries of Scotland, I was able to complete this analysis by traveling to Edinburgh, where for two weeks I worked at the National Museum of Scotland and the Collections Centre under the supervision of Dr. Jerry Herman (Vertebrates Collection) and Dr. Matthew Knight (Early Prehistory Collection). Comparative material was selected from the Broxmouth Hillfort, an Iron Age site that boasts the largest prehistoric faunal assemblage in mainland Scotland (Armit and McKenzie 2013: 433), and from the human remains recovered during previous excavations from the Covesea Caves. Contexts with a domestic character were specifically chosen from Broxmouth Hillfort in order to further illuminate the distinct taphonomic characteristics found within the Covesea Caves material that may be more indicative of ritual activity. In addition, comparisons between the human and faunal remains from the Covesea Caves will allow for elaboration on how the fauna were utilised in human-led rites during the Later Prehistoric Period.

Preliminary comparative results from the Broxmouth Hillfort material has already helped highlight the diversity of the species composition from the funerary contexts of the Covesea Caves; not only are characteristically domesticated species such as cattle (Bos taurus), sheep (Ovis ares), pigs (Sus scrofa), horses (Equus caballas), and dogs (Canis lupis familiaris) represented at Covesea, but also species that are more associated with the wild: including deer, fish, seabirds, and cats. There is also a noticeable difference in treatment – whereas the Broxmouth remains were mostly fragmented through butchery, the Covesea Caves material has a high amount of nearly complete bones, indicating that perhaps these bones were intentionally deposited as mostly whole and not consumed or utilised in any other way.

As for the human assemblages, early comparative results are also promising. However, it should be noted that only a small selection of human remains are currently stored at the National Museum of Scotland; the majority of these remains are located at the University of Bradford and are in the process of undergoing a similar comparative analysis. In addition, an element index analysis is planned so that the elemental composition of both the human and faunal assemblages can be suitably compared with one another.

Funding from the Society of Antiquaries of Scotland was used for accommodations, travel, and every day consumables during this two week research trip; additional funding was provided by the Prehistoric Society and the Glasgow Natural History Society. This project is part of my PhD dissertation, Ritual and Funerary Rites in Later Prehistoric Scotland: An Analysis of Faunal Assemblages from the Covesea Caves, being undertaken at the University of Bradford under supervision of Dr. Julie Bond, Dr. Jo Buckberry, Prof. Ian Armit (University of Leicester), and Dr. Lindsey Büster (University of Edinburgh).