A Society grant is crucial in this project to record Bronze Age rock art.

There are two aspects to the research, 1)the discovery of previously unrecorded panels , with an emphasis on confirming or extending the extremes of the current local distribution; 2) confirmation that the gaps in the distribution map locally and regionally are genuine and not due to lack of research or the negative locale is simply less likely to be visited by the usual reporters of chance finds i.e. walkers, forestry workers , farmers etc.  In both cases the method is field survey, quartering the chosen area, and if possible visiting at different seasons. 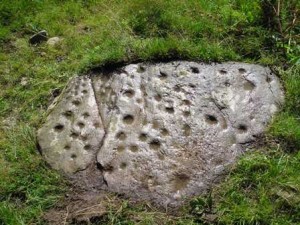 From 1) there were a total of forty four previously unrecorded panels discovered.  Twelve of those were from a six day field trip in Dumfries and Galloway.  All the examples including a ten figure grid reference and description of the finds have been submitted to ‘Discovery and Excavation in Scotland’.  Four of the Dumfries and Galloway examples, High Nunton, Dambog and Mill of Senwick 1&2 have extended the distribution on the Borgue peninsula northwards. Laggan 2 was mid way between two previously recorded clusters two miles apart.  Two of the marked rocks were visually striking; the motifs on the panel at Urlar 3 have three occuli (a cartouche/grooved enclosure containing two cup marks) which are rare in themselves but the enclosures also have indents between the cup marks creating an even rarer “eyebrow “ effect.  Lurgan 17 measures 1.4 x 0.9 metres and bears sixty four cup marks, a large number for the surface area, and one that would be noteworthy on a outcrop, many times it’s size. 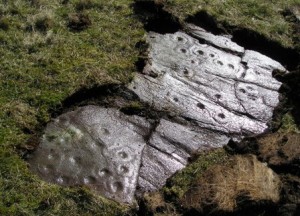 The most interesting examples of landscapes with no apparent rock art are those immediately adjacent to areas with multiple panels.  Of particular interest in the latter category are those areas bordering sites that have multiple examples of marked rocks.  One of the most striking examples has proved to be the upland strath above Aberfeldy at Craig Hill/Black Burn which is divided by the Urlar Burn.  The north side of the Burn has produced over ninety different panels in recent years whilst the other side, which has similar geology and topology, has none.  Five visits since the grant, in combination with previous field trips, have failed to uncover any marked rocks in an area of 7 km2.

Glen Cochill/Innercochill (3 km2 ).  An area that has multiple rock art sites within a two mile radius to the east, south and west, the appropriate geology for rock art and plentiful evidence of human activity from at least the Bronze Age.  There had been a previous report of an example of rock art recorded at the southern end of the Glen but in my opinion, and one I believe would be supported by other rock art researchers, the markings are natural and not man made.

Other areas surveyed with negative results are Fin Glen, Glen Clune-Loch Moraig, Glen Ample, Braevall, Knockean, Kippen–Buchlyvie Muir(s), Chapleton.
Other areas were also surveyed in this category but as they tended to be smaller or were related to sites that did include rock art they have been omitted.  The bulk of the grant was spent on petrol with smaller amounts on accommodation and replacing a broken GPS.  As I am unemployed the grant was crucial in allowing me to make a far greater number of field trips than I could normally afford.

In closing this report I would like to express my gratitude to the Society.