A Viking age Swedish runestone in Edinburgh with an interesting story to tell is on the move! 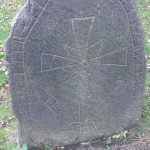 The runestone (U 1173) is a 1.3 ton, grey granite stone, approximately 1,000 years old, 1.8m high by 0.9m wide. One side has been carved and around the edge is a runic message, framed in a stylised serpent-form, surrounding a central cross whose stem is linked to the serpent’s head and tail by a collar. The carved stone has distinctive features which have close similarities to 18 other stones in Sweden which are attributed to or signed by a runemaster called Erik.  Runestones are typically raised stones with a runic inscription, but the term can also be applied to inscriptions on boulders and on bedrock. The tradition of making runestones began in the 4th century and lasted into the 12th century, most dating from the late Viking Age. The majority of runestones are located in Scandinavia, are often memorials to the dead and usually brightly coloured when first made.

The inscription on runestone U 1173 starts at the head of the snake and runs clockwise. It follows a standard formula and contains sentiment common on late Viking Age Swedish memorials: a son commemorating his father together with a prayer.  It says:

Translation into English: “Ari raised the stone in memory of Hjalmr, his father. May God help his spirit.”

Originally from Lilla Ramsjö, Vittinge parish, Uppland, Sweden, the 11th century (c. 1010-1050 AD) stone was donated to the Society of Antiquaries of Scotland in 1787 by Sir Alexander Seton of Preston and Ekolsund (né Baron, born 1738 – died 1814). He became a Fellow of the Society of Antiquaries of Scotland in 1796 and then between 1804 and 1813 he was one of the Vice-Presidents of the Society.  After Sir Alexander Seton gifted the runestone it was placed outside Chessel’s Buildings by the Canongate in Edinburgh and followed the Society up to Castle Hill in 1804 before being moved “with difficulty” to a steep slope in Princes Street Gardens in 1821 as a gift to the Princes Street Proprietors. The stone remained there unnoticed and hard to reach due to its position. It was one of the earliest acquisitions by the Society, which had been founded seven years previously.

In early 2017, during the Year of History, Heritage and Archaeology, the Society of Antiquaries of Scotland started discussions and worked with several partner organisations to conserve and move the runestone to a safer location in central Edinburgh, in order to make the ancient carved stone accessible and visible to everyone all year round. The new location chosen is outside the University of Edinburgh’s Scandinavian Studies Department at 50 George Square.

Funding was secured from the Heritage Lottery Fund and Edinburgh World Heritage Trust and permissions granted by Historic Environment Scotland to enable the runestone to be moved. National Museums Scotland have added the stone into its national collection, transferred from the City of Edinburgh Council, and have completed a loan agreement with the University of Edinburgh. 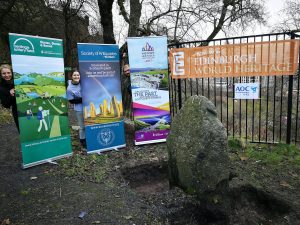 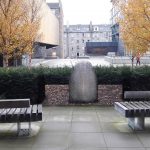 Photomontage of runestone in its proposed location

In December 2017, experts from AOC Archaeology carefully excavated and lifted the runestone out of the ground. These stages were filmed and a short video made with thanks to Edinburgh World Heritage.

Over the following year the runestone was scanned, assessed and conserved, and new interpretation panels produced.

The installation of the runestone in its new location – outside 50 George Square – is planned to take place in autumn 2019.

A variety of free public events to celebrate the unveiling of the runestone in its new location, including a number of free guided walking tours led by an expert storyteller, are planned for autumn/winter 2019 and spring 2020.

More information and how to make bookings will be available on the events page of the Society’s website soon.

We look forward to seeing you at the events and helping spread the word on this ancient runestone.

Thank you to everyone who has given support to the project in many different ways, with special thanks to our project funders and project partners.