The Society helped transform an early Bronze Age burial into one of the best researched of its kind.

Funding from the Society for pollen and isotope analysis has helped transform a little-known, archaeological site into one of the best researched of its kind. 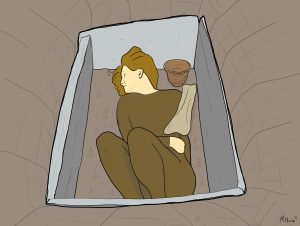 The Achavanich Beaker Burial project was set up to research an archaeological assemblage found almost three decades ago in the very north of mainland Scotland. In 1987 a Bronze Age cist burial containing the incomplete skeletal remains of a young adult female and associated grave goods – including a short-necked beaker, a bovine scapula, two flint flakes and a flint thumbnail scraper – was accidentally uncovered during rock extraction for road improvement works at Achavanich in Caithness. The original post-excavation work carried out in the late 1980’s and 1990’s consisted of: radiocarbon dating by the British Museum, an osteological examination identifying the individual as a woman aged between 18-22 years of age and pollen residue analysis indicating the potential for surviving archaeobotanical remains. Unexpectedly the excavator of the site, Mr Robert Gourlay of the then Highland Regional Council Archaeology Unit, passed away a few years later and for the better part of three decades the site was mostly forgotten and, until now, not subject to any further research.

In 2014 I came across the Highland Council’s record for the site on their Historic Environment Record. I was quickly captivated by the site and assemblage and could see that the archive and archaeological collection still had a lot to offer. After several months researching and analysing, I applied to the Society of Antiquaries of Scotland for funding to carry out pollen residue and isotopic analysis, with the help of Dr Alison Sheridan who also secured the assemblages inclusion in a larger ancient DNA research project being carried out by the Natural History Museum in London. When I received the news that the grant application was successful I was ecstatic. The funding then went towards two specific pieces of research which have revealed fascinating insights into the life of the individual, now known as ‘Ava’, who lived in Caithness during the Scottish Bronze Age. 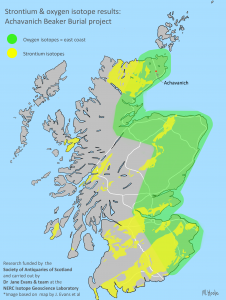 The first phase of research funded by the Society of Antiquaries of Scotland involved Dr Jane Evans and her team at the NERC Isotope Geoscience Laboratory. As the surviving skeletal remains are in a well-preserved state we thought that there could be a high chance of producing good results through stable isotope analysis. Strontium and oxygen isotopes (taken from the tooth enamel of a second molar) were analysed to investigate childhood origins, and carbon and nitrogen isotopes (taken from a sample of bone collagen from a rib bone) were explored to find evidence of the diet of this individual. The primary isotope reference datasets for Britain suggests that the expected strontium isotope composition for the area where this individual was buried would be between 0.709 – 0.710. The results from the strontium isotope analysis revealed a composition of 0.711. Although this is a slightly elevated reading for the predicted range of the Achavanich area, which is underlain by Old Red Sandstone, the areas directly to the south and west, underlain by older rocks, could produce this value. Oxygen isotopes are determined by rainfall and generally can easily be matched with either the east or west coast of Britain due to the clear differences in rainfall. The result from the oxygen isotope analysis sits well within the expected range for the east coast of Britain. The most unusual reading for the analysis came from a very low carbon value relative to most available data from the British Isles. This is likely due to a diet exclusively consisting of terrestrial plants and animals – including freshwater fish – and potentially excluding most or even all marine resources. The results of the isotopic analyses suggest there is no reason that this individual could not have spent their early childhood in what is now geographically defined as the Caithness region of northern Scotland.

Plants found as pollen from the burial

The second phase of research funded by the Society was a pollen assessment of deposits on both the inside and outside of the beaker carried out by Dr Scott Timpany of the University of the Highlands and Islands. Although initial analysis in the 1990’s suggested there was an abundance of pollen, it appears that over the intermittent years the pollen has deteriorated. However, a small number of pollen, spores and non-pollen palynomorphs were recovered during the recent re-examination. Although the results from this analysis cannot provide a statistically valid interpretation of the deposits and the depositional environment, they may – with caution – be able to provide some suggestions. Of the pollen recovered the majority were from trees and shrubs including birch, pine – most likely Scots pine – hazel and alder. Heather was also identified, as well as grasses, meadowsweet and St John’s wort. The spores of ferns, bracken and sphagnum mosses, as well as a number of pine stomata, a coprophilous dung fungi, and the presence of host plants including rushes and cottongrass were also identified, and microscopic fragments of charcoal were recorded in all samples. The presence of animal dung is implied by the dung fungi, which may suggest that grazing animals were present around the cist during the period of internment. The occurrence of pine stomata and the variety of tree and shrub pollen hints at a woodland context; where the presence of rushes, grasses and heather suggest a heathland environment. The inclusion of meadowsweet proves interesting as it has also appeared at other Bronze Age burials elsewhere in Scotland. The presence of both meadowsweet and St. John’s wort may represent a deliberate inclusion of flowers within the burial. Interestingly, both of these plants are also considered to have medicinal properties. Lastly, the presence of charcoal may suggest that some burning might have occurred in the landscape around the cist. However, all of these interpretations must be taken with caution due to the limited results.

Although radiocarbon dating was undertaken in late 1980’s, the project has recently received new dates courtesy of the Natural History Museum in London. Interestingly, these new dates (SUERC-71005 3827±33 BP, 2460-2140 cal BC at 95.4% probability) have come back with a result around 200 years earlier than the original (BM-2590 700±50 BP, 2280-1940 cal BC at 95.4% probability) firmly placing this burial in the early Bronze Age. Whilst other Bronze Age burials have been radiocarbon dated from the area, the individual from the burial at Achavanich is currently the earliest identified person local to the Caithness area. 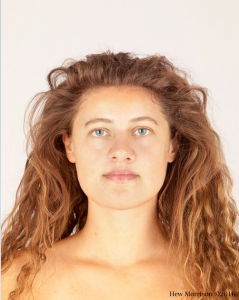 Facial reconstruction of the woman buried at Achavanich by Hew Morrison.

In addition to the research discussed above, the project has also undertaken a range of analysis including a facial reconstruction created by forensic artist Hew Morrison. The reconstruction proved so popular that it went ‘viral’ and in doing so reached over 50 million people on one social media platform alone, as well as in numerous printed and online newspapers. This would not have been possible without the support of the Society, who chose to give me and the project a chance to shine, and for this and all their support I am most grateful.