Excavations on Lismore are exploring the nave of the important church there. 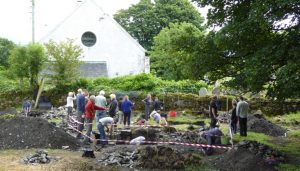 The Cathedral of Argyll on Lismore was one of the most important medieval buildings in the W Highlands (started c1250), a major achievement of the ruling MacDougalls, but it is now one of the most neglected.  It lies within the bounds of the Celtic Church monastery established by Moluag and within sight of two large Bronze Age cairns and the Iron Age broch at Tirfuir.  The Lismore Nave Project is the most recent phase of a long-term enterprise jointly planned and managed by the Lismore Historical Society and the Parish Church on Lismore, to explore, preserve, interpret and give public access to this ancient and continuing centre of power and ritual. 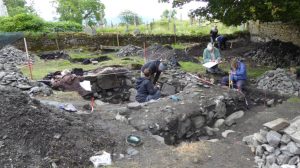 The aims of a second year of community archaeology in July 2017, under the supervision of Dr Clare Ellis and funded by a grant from the Society of Antiquaries of Scotland, were to complete the exposure of the walls of the ruined nave, to evaluate the base of the proposed west tower, to explore the entrance to the nave, and to provide the information needed to judge whether the surviving walls are sufficiently robust to be exposed permanently.  These aims were met in full during a seven-day dig:  the remaining walls were exposed and evaluated;  the existence of the tower was confirmed;  the south door threshold was revealed, giving evidence of the original floor depth;  but most of the mortar in the surviving masonry had deteriorated to such an extent that permanent exposure to the elements could not be recommended.   Future presentation and interpretation of the nave and tower would have to be by indirect means.  The opportunity was taken by Dr Mark Thacker to sample mortar from the building for dating purposes, and the project also included searches within the trenches, in the surrounding area, and in walls and buildings for the white Morvern sandstone used in the detailing of the building.  Two examples of “nailhead” detailing found on the site, and larger pieces of window framing will provide support in the dating of the building. 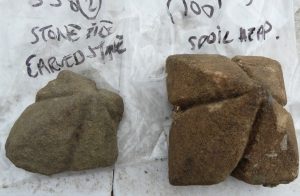 These findings provide the information needed for plans to present and interpret the cathedral, showing how the chancel (converted into the modern parish church) relates to the ruined nave and tower.  The project has played an important part in fostering interest in the building and site (around 150 visitors) and in providing basic training to a team of 15 volunteers, which will prove valuable in later stages of the joint enterprise.