Re-examination and re-interpretation of the flints from Lunanhead, Angus 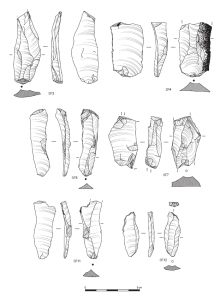 Introduction
A grant was applied for by, and granted (£2,218) to, Torben Bjarke Ballin for the re-examination and re-interpretation of the lithic assemblage from Lunanhead, Angus. This assemblage was first dealt with by Caroline Wickham-Jones and published in PSAS by Wickham-Jones and Mackenzie (1996). They dated the finds to the Neolithic period, and this made sense at the time, as no Scottish Late Upper Palaeolithic (LUP) sites had been published yet and the authors’ dating of the finds was supported by most lithics specialists present in Scotland at the time.

In connection with my work on Scottish LUP matters, I subjected the assemblage to cursory examination (2017), and compared the Lunanhead finds with the assemblages from Howburn and Milltimber, and it was my view that the Lunanhead assemblage most certainly dates to the LUP. This view is supported by the type of raw material (which could be Yorkshire flint, but which is more likely to have been procured from Doggerland); the over-sized blades (generally larger than later Neolithic ones); the extensive use of cresting (which is less commonly used in the following periods); the fact that the parent cores were clearly very large opposed-platform cores, where Mesolithic and Early Neolithic cores tend to be smaller single-platform cores, and later Neolithic cores tend to be Levallois-like cores (Ballin 2011); and the presence of several burins (predating the Neolithic), including burins on truncations (generally predating the Mesolithic). 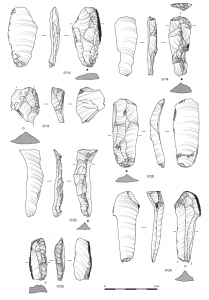 Results
The assemblage has now been thoroughly re-examined and the analysis confirmed my expectations: The Lunanhead is indeed Late Upper Palaeolithic, although it is presently not possible to date the finds to any specific period/industry within this general period. The results are presented in a paper, which has been submitted to PSAS.