A grant from the Society enabled the gathering of information from two important organisations. 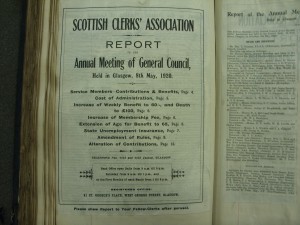 One of the most important changes to working lives during the twentieth century was the expansion of non-manual employment. The numbers of workers employed in manual occupations declined whereas employment in the service sector, including clerical work, rose dramatically. The grant awarded from the Society of Antiquaries of Scotland enabled me gather information from two important organisations that will contribute to our understanding of the working lives of this group of employees. The grant enabled me to make three short research trips to consult the records of the Scottish Clerks’ Association (held at the University of Glasgow) and material from the Railway Clerks’ Association (held at the National Library of Scotland).

The Scottish Clerks’ Association was founded with the objective of insuring its members against loss caused by employment, sickness, old age and death. During my research trips I viewed a selection of the minute books, General Council minute books and an agent book of the Association. The records highlighted the assistance provided by the organisation to its members facing hardship (such as illness and unemployment) via the administration of benefits and through its benevolent fund. The records also detailed its activities to support clerks (for example, via its own the employment agency) and to improve their working conditions (for example, via its support of the Offices Regulation bill which sought to legislate against unhealthy and poor conditions prevalent in some offices). I was also able to identity how the Association promoted itself as a professional body.

The three short research trips funded by the Society of Antiquaries of Scotland will feed into my broader project on clerical workers. Alongside material gathered from a number of other company and trade union archives, the research carried out using the Scottish Clerks’ Association and Railway Clerks’ Association records will enable me to inform debates about the transformation in workplace culture and practices within this sector of white-collar work.