Research into the collections at Highland Folk Museum and Mitchell Library 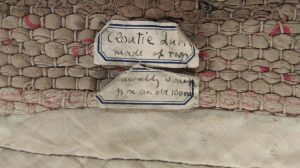 As part of a wider project investigating women and founding of folk museums in the early to mid-twentieth centuries, the grant from the SSA allowed me to spend some time at the Highland Folk Museum in Newtonmore, examining the collections and museological approaches of Dr Isabel F. Grant. I reviewed all the archival material relating to Dr Grant’s collecting and spent some time in the stores looking at the actual objects, none of which, sadly, are currently on display. Additionally I examined papers of Dr Grant held at the Mitchell Library, Glasgow. The purpose of the trip was to get a better sense of the collection itself, Dr Grant’s approach to and motivations for collecting (beyond what was in her published work), and the way in which she used it museologically, to compare with other women who collected and displayed folk material between around 1880 and 1960, a period when social history, broadly conceived,

Dr Grant collected objects and traditions from the Highlands and Islands from the earliest finds to very recent products, to exemplify a clan-based society she saw as classless and international. In contrast to other folk collections in Britain at the time she was keen to acquire objects which provided evidence of travel and cross-fertilisation of cultural traditions, and also against the practice of other collectors of ‘folk’ material she collected elite as well as ordinary objects. Both the Highland Folk Museum and the Cambridge and County Folk Museum included objects from the relatively recent past which were in many ways created with modern manufacturing techniques in the mid-late nineteenth century rather than representing folk traditions and craft skills, but which were included in both places because of a sense of nostalgia, as people remembered seeing them in their parents’ or grandparents’ home.

There are additionally many similarities between the collection formed for the Highland Folk Museum and others formed by women at similar dates elsewhere, such as for the Cambridge and County Folk Museum, and the garden designer Gertrude Jekyll’s collection. All these focus on domestic activities such as cooking, textile production and lighting the home, as well as furniture and the accoutrements of the cottage fireside. They also tend to share a view that traditional objects and manufacturing skills were being swept away by the forces of modernity and therefore saw their own collecting activities as rescuing such objects from oblivion. A particular sense of urgency about the disappearance of objects is obvious in Dr Grant’s letters although it is conversely also true that the increasingly high prices commanded by some ‘folk’ material as it became highly desirable was a factor in her collecting practices.

Folk museums and collectors also share a certain interest in new ways of displaying folk material, partly inspired by Scandinavian folk museums and their reconstructive approach, which was becoming known in Britain in the early twentieth century. Thus the Highland Folk Museum, along with Cambridge and County Folk Museum, displayed objects in recreations of hearth/fireside scenes inside the galleries. The Highland Folk Museum, though, in contrast to other UK museums and also to Scandinavian museums, developed a unique approach to reconstruction, arguing that Highland buildings could not be moved and reconstructed in the way Scandinavian timber-framed ones could, and that the really important aspects were the traditional building materials and building skills. Thus at the Highland Museum three cottages were built from scratch in the style of three areas of the Highlands and Islands using materials and craftsmen from those locations. These cottages then acted as a location for further reconstruction of scenes and techniques; images show spinning, knitting and cooking taking place in the cottages although it is not clear how regular such activities were and if they were actually carried out in front of visitors.

Although the domestic focus of the Highland Folk Museum and other UK folk museums may not be a surprise and may not by itself indicate a particular gendering of folk museums, there are signs that the Highland Folk Museum developed a specifically female view of the past; a view of the past as preserved by women. Dr Grant repeatedly referred to objects as coming from ‘our grandmothers’, or as ones which ‘our grandmothers’ knew how to make, use and repair. Most of her main collaborators were also women and girls, and their profound interest in women’s crafts is clear. An interest in the handmade extended to various aspects of the displays such as handwritten labels and other interpretive material showcasing Dr Grant’s own calligraphy. By contrast, men’s crafts were much less prominent with the exception of cottage building, and men often feature in her letters as obstructing her collecting and museological work.

The research gathered here will feed into my ongoing work; I hope to publish an article on the topic in 2018.