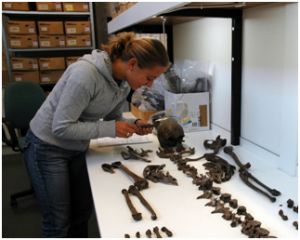 Laura at work in the lab

Steering towards the final phase of my PhD, I am very grateful for receiving the student bursary from the Scottish Archaeological Research Framework, which enabled me to attend and present at the 8th International Symposium of 14C & Archaeology in Edinburgh. The smoothly organised symposium was spread out over five days, two of which were full days while the other three were half days, which was a great way to give people time to digest all the information from presentations and browse the many posters that were on display. The presentations illustrated the usefulness of radiocarbon as a dating tool, although there are still issues, such as choosing the right sample pre-treatment and dealing with reservoir effects. I was very keen to attend the sessions on these two topics.

For my PhD I am examining the palaeodiet of prehistoric people in Denmark using stable carbon and nitrogen isotope analysis in combination with radiocarbon dating. These two methods are closely connected as the consumption of specific foods, such as freshwater and marine fish, can result in incorrect radiocarbon ages due to reservoir effects. Basically, when you eat fish, you are much older in radiocarbon years. However, it became clear from other talks as well, that these two stable isotopes do not always successfully demonstrate fish consumption, and hence possible reservoir effects, in human individuals, and other methods are needed. Since hydrogen stable isotopes can function as a trophic level indicator but remain unaffected by factors influencing the regularly applied carbon and nitrogen isotope systems, a combination of these three isotopes would be able to provide improved calculations of the amount of fish, and thus old carbon, in human individuals. This would not only apply to prehistoric individuals from Denmark but from other regions where a combination of lakes, rivers and sea offered appealing habitation sites as well.

The symposium was balanced between presentations focussing on radiocarbon as a tool in archaeological research and those dealing with improvements regarding the radiocarbon date obtained from the laboratory. On the final day a forum enabled the interaction between these two groups, which highlighted the need for increased communication between scientists in the field and in the lab.

The symposium also offered a great networking opportunity, there was enough time during lunch and coffee breaks to talk to people. The atmosphere of the whole symposium was professional, yet very accessible, which made it easier to start conversations. Overall, the symposium was an incredibly useful and pleasant experience.