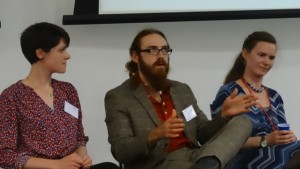 Zechariah Jinks-Fredrick (centre) at the IARSS, deep in discussion about Iron Age depositions and hoards

The Iron Age Research Student Symposium for 2016 was an excellent conference with representatives from across the United Kingdom and much further afield. The Prehistoric Society and the Prehistoric Finds Group kindly sponsored meals and the wine social on the first night of the conference. The wine reception was preceded with a keynote address by Dr. Colin Haselgrove detailing the recent excavations and work done at the oppidum of Stanwick in North Yorkshire.

The question of what is and is not an opiddium is of growing importance in Iron Age archaeology in the UK and was one topic of the many papers presented over the two days of conference proceedings. As this is a short reflective account not all papers may be discussed in entirety, and the focus will be placed on the current research in Northern England.

The author’s paper was the only paper detailing Iron Age studies in Wales and Scotland which demonstrates the necessity for researchers in Scotland and Wales to better represent themselves at such proceedings. Returning to papers presented on studies in Northern Britain, three were focused on the Iron Age communities of Eastern Yorkshire. One particular paper presented was by a French researcher studying the similarities in square barrow depositional traditions between the East Riding of Yorkshire and the Champlevé area of France. Other papers included decorative metalwork depositions and chariot burials, both in Eastern Yorkshire. Beyond the East Riding, a independent researcher now working for the Portable Antiquities Scheme, presented a thought provoking paper on the manufacture and deposition of copper alloy axe heads in Early Iron Age Cumbria.

The papers presented by researchers from further afield were also quite valuable in terms of comparison to the author, in particular were the studies on topics in Sweden, Hungary, and Croatia. In conclusion, the author was provided with additional information for his own research and made new connections outside of the UK in Iron Age archaeology; this details the success and value of the conference proceedings.