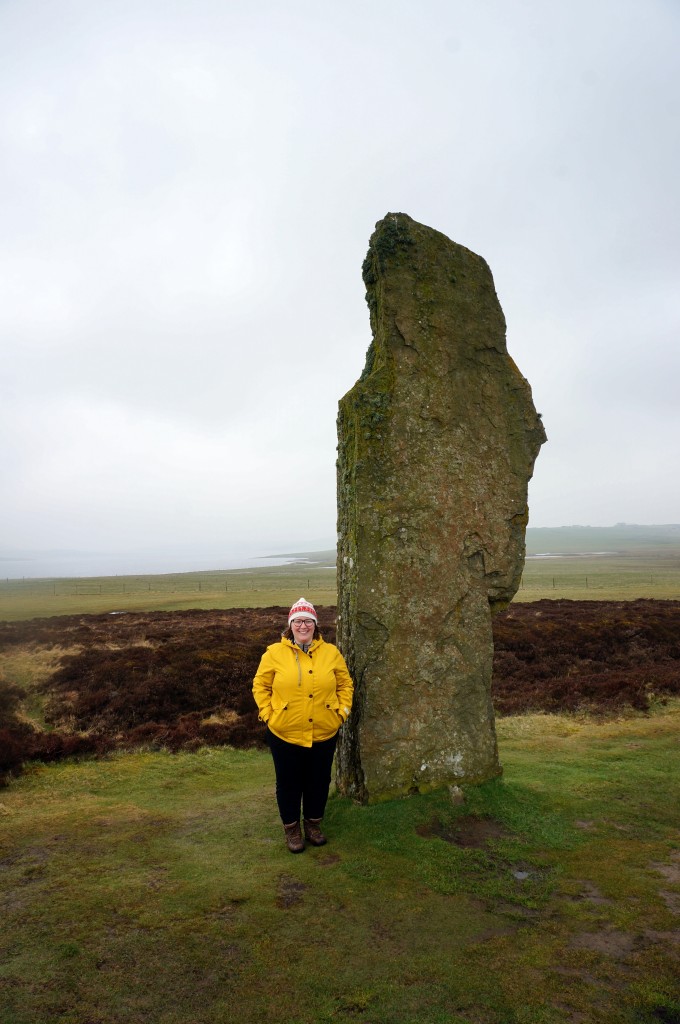 Albina on the AEA field trip to the Ring of Brodgar

I am very grateful to ScARF for supporting my attendance to the Association for Environmental Archaeology conference 2016 in Orkney. The theme of the conference was “Islands: Isolation and connectivity”, which fits perfectly with the research I am currently working on. I am a zooarchaeologist from Iceland, but have worked on animal bones from Iceland, Greenland and Ireland. Having just recently secured funding for my work I will apply for an interdisciplinary PhD at the Agricultural University of Iceland (AUI) and the University of Oslo (UiO) next fall where I plan to use ancient DNA methods along with traditional zooarchaeology to study the origins of livestock breeds in the North Atlantic with a focus on horse and sheep. We will be analysing bones from Iceland, Greenland, the Faroe Islands, Scotland and Scandinavia. The project is called “The Horses and Sheep of the Vikings: Archaeogenomics of Domesticates in the North Atlantic” and is funded by the Icelandic Research Fund grant no. 162783-051.

Attending the AEA spring conference in Orkney was a great experience for me. It gave me a chance to meet up with old colleagues and make valuable new connections with people working on Scottish material. These connections will be of great help for finding animal bones to sample for our new project. It was very interesting to see all these papers on island-related work from such different points of view presented together. I especially enjoyed hearing about the zooarchaeology of the Canary Islands, analysis of whale bone artefacts, a paper on red deer which utilized ancient DNA methods, a presentation on the Hanseatic falcon trade, the utilisation of avian resources on North Atlantic Islands and isotope work being done on Baltic cod – just to name a few. Seeing so many projects presented which successfully utilized interdisciplinary methods was inspiring. Terry O’Connor’s plenary lecture on the history of island research gave a great overview of the field for the last decades and highlighted how much knowledge has been created by archaeological research.

I presented a paper “Origins of North Atlantic domestic animals: Current knowledge and the possibilities of interdisciplinary studies” co-authored by my supervisors Dr Jón Hallsteinn Hallsson at AUI and Dr Sanne Boessenkool at UiO on the project we are just starting. I received many great comments from the audience that will help us move the project forward.

It was also important for me to really experience how different the environment in Orkney is from what I am with familiar with from Iceland. When I left Reykjavík in the end of March we had just had some snow and spring was still a few weeks away, but in Orkney everything was already green and the lambing season had started. It is hard to imagine how people in the Viking Age dealt with such different environments and it was invaluable for me to see this difference first hand. It has really changed the way I look at the movement of people and animals around the islands of the North Atlantic. It was also valuable for me to see the extensive Neolithic archaeology in Orkney – as Iceland was not settled until the late 9th century we have nothing similar here.

As a whole being able to attend the AEA conference in Orkney benefitted me immensely and I came back to Iceland very energized and full of ideas for my research.
Albína Pálsdóttir
PhD Candidate
Agricultural University of Iceland