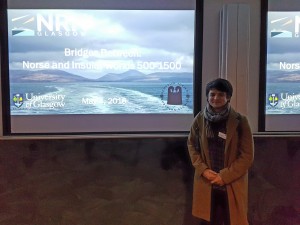 Will Wyeth at the Nordic Research network conference

I have relied greatly on the ScARF’s panel reports for the early stages of my studies, so it was a great privilege to be awarded a bursary to attend the Nordic Research Network day conference at the University of Glasgow entitled ‘Bridges Between: Norse and Insular Words AD 500-1500’, on the 4th of May 2016.

I am a third-year PhD student based at the University of Stirling and Historic Environment Scotland, supported by the AHRC as a Collaborative Doctoral Award recipient. My research looks at different aspects of Scotland’s early stone castles, tending towards an examination of architecture, archaeology, history and landscape of ‘power centres’ in the 12th-13th centuries. Castles are an iconic feature of Scotland, though the earliest monuments are poorly understood.

This is especially the case for the ‘Late Norse castles’, apparent in the mid-12th century in the Scandinavian Earldom of Orkney and Caithness, which form a section of my thesis. My paper examined one site closely connected to this small group, the Castle of Old Wick in Caithness. A place called Vík is mentioned in a source written shortly after the events which it describes took place, and often it has been assumed that Vík – an important place in the source – was the Castle of Old Wick. I looked at the farms with Old Norse names and around the Castle, and compared it to the area around the modern burgh of Wick; I concluded it was more likely Vík was under the burgh than the Castle. This was because there was not a very strong Norse place-name or monumental presence around the Castle, whereas this was the case for Wick. Fieldwork after the conference seemed to suggest too that the Castle was a later medieval construction, perhaps 13th century in origin at the earliest.

I thoroughly enjoyed the conference; all the papers served to inform my own work and offer fresh perspectives on how I might approach the wider themes of my thesis. As someone who is really approaching the Late Norse world as an outsider, it was great to be encouraged and welcomed by fellow researchers and academics. I also received very useful and thoughtful feedback from the established academics who attended, for which I’m very grateful.