The Presence of Majestie – Day Conference 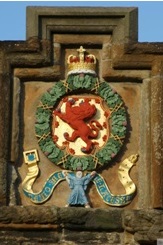 Day Conference
sponsored by the Heraldry Society of Scotland

The proposition to be examined is that there was a considered and coherent programme to promote the new King to his people, and himself and his country to the other crowned heads of Europe;  and that this campaign was initiated almost immediately he seized power aged 16 in 1528, and was only terminated by his early death aged 30.

£15 to include coffee and tea, on arrival and in the two breaks.
For lunch there are many and various eateries on George IV Bridge.