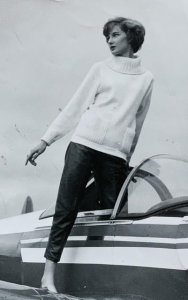 Virginia Glenn died in Edinburgh on 28th Dec 2018 after a brief illness, just short of her 78th birthday. A medievalist and specialist in the decorative arts, especially goldsmiths’ work and seals, she spent most of her career as a museum curator.

Never afraid of challenging authority, Virginia brought sparkle and verve to her professional and private lives. She was gregarious, quick-witted and wonderfully hospitable, a giver and lover of parties.

Her Ph.D., entitled ‘The emergence of the Gothic style in 13th century Parisian Goldsmiths’ work’ was awarded by the Courtauld in 1991. Her publications included articles on seals, especially Scottish ones, Welsh ceramics (Perlau’r parlur = Pride of the parlour: a selection of Victorian Welsh pottery, Cardiff 1984) and importantly, Romanesque & Gothic: decorative metalwork and ivory carvings in the Museum of Scotland, Edinburgh: NMS, 2003.

She was born on January 16th 1941 in Armagh into an artistic family. Her father collected clocks and antiques, one aunt was a fashion designer, an uncle was a cartoonist and illustrator, and her mother and uncles were involved in amateur dramatics. She went to schools in Armagh and Belfast, and studied art at the Belfast College of Art and in Edinburgh. Here she met Brian Pow, and they married in 1966, although they separated & divorced a few years later. Her first job was as assistant in the Royal Scottish Museum in Edinburgh.

Going from Edinburgh to London’s Victoria & Albert Museum, Virginia worked on tapestries as an assistant conservator. Realizing that she really wanted to be a curator, for which a degree was desirable, from 1969-72 she studied for her B.A. in art history at the Courtauld Institute, and in her last term there got a curatorial job in the Birmingham City museum and art gallery. Here she helped organize and catalogue the important exhibition of Birmingham silver: Birmingham gold and silver 1773-1973: an exhibition celebrating the bicentenary of the Assay Office 28 July-16 September 1973.

From Birmingham she went on to the National Museum of Wales in Cardiff, where she helped catalogue the major Burges exhibition, The strange genius of William Burges, “art-architect” (1827-1881): a catalogue to a centenary exhibition, ed. J. Mordaunt Crook, Cardiff & London 1981.

Finally, to her great pleasure, she returned in 1985 to the National Museums of Scotland, in Edinburgh, a city she loved. A range of activities in the museum included refurbishing the European ceramics and glass galleries, and arranging new European decorative arts galleries, for which she commissioned a huge and ornate silver vase from Malcolm Appleby, goldsmith and gunsmith.

Professional advice given included to the Heritage Memorial Fund, over the fitting-out of the Clyde paddle-steamer Waverley. Taking early retirement in 1996 from a Museum she regarded as having become tiresomely bureaucratic, Virginia enjoyed research and its attendant trips all over Europe, and the company of her friends.

Her generous bequest of her estate to the Society of Antiquaries of Scotland will hugely benefit all those who share her interests, now and in the future.