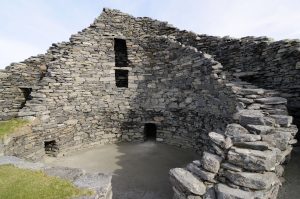 We are very pleased to announce that the recording of the 2018 Rhind Lectures is now free to view on our website.  Please head over to our Resources section, tick “video” and search for Rhind for a full list.  The Rhind Lectures this year were presented twice including in Rhind’s hometown of Wick in Caithness, Scotland, for the first time!  We are very grateful to the speaker, Dr John Barber FSA Scot, for enabling this to happen, and to Yarrows Heritage Trust for inviting the Society to present the lectures at the Pulteney Centre and hosting us so graciously.  We are also very grateful to Nucleus: the Nuclear and Caithness Archives for bringing along material relating to Rhind for display at the first lecture.

The Lectures
The technical engineering capacities of prehistoric builders of large Neolithic and Iron Age structures are intriguing. Invasive introduction has been the favoured explanatory mechanism for structural innovation in these islands, rather than the converse appeal to domestic design genius. However, drystone engineering so constrains the builders’ design ambitions that similar structures result from the limitations of the technology more than from the social interconnections of their builders. These lectures explore the interplay of technological capacity and design freedom in prehistoric Scotland.

The Lecturer
John Barber was born in Cork, Ireland, in 1947 and graduated from University College Cork, before going on to a career in archaeology. He recently graduated with a PhD in Architecture at the University of Edinburgh, building upon two decades of specialist interest in large drystone-built structures in Western Europe in general and the British Isles in particular. Between 1976 and 1992 he worked in what has now become HES before leaving it to found the AOC Archaeology Group, of which he was managing director until 2011. In the recent past he has excavated, mainly for conservation purposes, elements of three Neolithic chambered cairns and was involved in the excavation of five brochs. He is currently involved in the excavation and conservation of brochs like Clachtoll, Castle Grugaig and others. In developing approaches to these monuments, he has also re-constructed cairns and brochs and their compositional elements at scales ranging from 1:50, to 1:1, to study their stability issues and decomposition mechanisms.