Elizabeth Darling, Reader in Architectural History at Oxford Brookes University, will be presenting a free lecture on her research into how women contributed to the reform and transformation of urban environments from the 1890s to the 1950s. Elizabeth received a Research Grant to support her work. All Fellows are invited to attend the talk at 6.30pm, 9th December, Serenity Café, 8 Jackson’s Entry, The Tun, Edinburgh. Full details here

In 1906, a one of Britain’s first Free Kindergartens, the St Saviour’s Child Garden, was opened in premises at Brown’s Close, Canongate. Intended as ‘a contribution to the solution of the slum problem in Edinburgh,’ it formed part of a broader programme of social reform enacted by the Episcopal church of Old St Paul’s, and was run by an energetic young Englishwoman, Lileen Hardy. This talk will explore Hardy’s work at the kindergarten, its connections to Old St Paul’s, and more particularly what it tells us about the contributions made by women to the improvement of living conditions in Edinburgh’s slums. 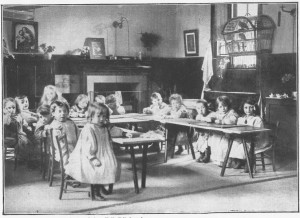 A Tiny Enclave of Social Action