A year ago I moved back to Edinburgh on retiring as a research scientist and looked to get involved in things where I had previously been a passive observer. That sounds easier to say than it is in reality!  I have been a Fellow of the Society for over 20 years so it was one of the groups I looked at.  It was odd how it started. My wife enjoys cross-stitch and the Society had a book launch of Remember Now Thy Creator: Scottish Girl’s Samplers at Register House.  We went to it, were made very welcome (and there was wine) so had a good start.  Going to the Anniversary meeting and talking to staff and others reinforced that good impression and confirmed to me that there might be some way I could usefully get involved.

Perhaps I should add that although a research chemist by profession, I have always been interested in medieval church architecture.  I remember being struck by the remaining roof vaults in Melrose Abbey when I was about 6.  This has been a running theme in my life with reading and visits, including sometimes grabbing opportunities while abroad on other business (and I travelled a lot), to broaden my knowledge and explore sites throughout Europe and beyond.  As time went on I found that I could not just focus on the architecture, for it reflected the society in which it was conceived, but I needed to understand the context. This led me to study the history, music and other related areas – climate and economics also formed a part of this.  It is worth adding that connections and networking had also become a major part of my day job and I learned a lot from wide-ranging conversations which were not always about work!

So with this background I started to attend lectures and found them far from the dry academic talks that I had feared.  This encouraged getting involved, and the Society, including the DigIt! team, were very approachable and helpful.  My interests and theirs seemed to coincide in many ways and resulted in a proposal to look at medieval faith as part of the Lifelong Learning remit of Dig It! 2015.  After detailed discussion it seemed sensible to focus on a more manageable area such as the North East – it has always been slightly apart – linking it with existing interests and exploring new approaches to Life Long Learning. Getting on well with Jeff Sanders, Project Manager, and the rest of the Dig It! team did help!  Their enthusiasm and warmth is infectious! 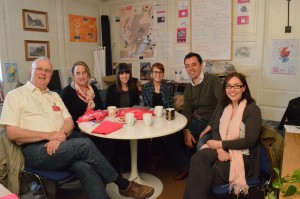 Why the North East?  It has several major sites including St Machar’s Cathedral, Deer Abbey and King’s College, which didn’t develop in isolation and had links with northern Europe.  It made for a discrete pilot area, and given that there was an active Life-Long Learning focus there, it seemed ideal.  Dig It! had several contacts already in place too.

One thing led to another, in this case a visit to Aberdeen; I had found a contact in the Presbytery and Jeff had several others.  By this time the idea of ’Pilgrimage’ had emerged as a theme and it is one that is being explored by many!  We found that the many approaches seemed only loosely connected.  One thing we quickly realised was the there is a role for the Society to act as the bridge between the various groups – allowing them to do their own thing but linking them so more could be done and done better!  Did I mention networking?

Two trips to Aberdeen and local discussions in Edinburgh are producing a proposal for the way forward with groups who see this as an opportunity to do more and get more. We are also developing links with the Scottish Churches Trust who have a focus on pilgrimage as a way of introducing people to the richness of Scottish church buildings and their history. Finally we are also a developing link to the single focus of Cramond, where I now live, and which has a massive amount of history and archaeology.  This last activity includes DigIt!, the Smart History team at St Andrews University and the Cramond Association.  I have enjoyed the discussions and the new directions.  Sometimes I felt that I needed to apologise for my enthusiasm running away with me!

This has been fun.  I have enjoyed working with the knowledge that I have developed through my ‘hobby’; I have enjoyed working with enthusiastic and knowledgeable people both in the Society and outside. I have enjoyed finding ways to use what exists to help others to learn about the history and culture of Scotland and beyond to Europe though links with the Hanseatic League, Scandinavia, France, the Low Countries, Ireland and England.  I found it particularly enjoyable to find ways to use my skills. I had limited understanding of how I could use my experience in this different specialist world, while the DigIt team are expert in finding ways to make things happen.

So, I can recommend getting involved. I am sure that there will be more opportunities to reach new audiences, to find new opportunities and to help increase the understanding of Scotland’s past.