We are very pleased to have Ian and Kenneth join our team, and look forward to working with them on several exciting new projects due to get underway soon.

President of the Society of Antiquaries of Scotland (2020 – )

Ian became a Fellow of the Society in 1969 as an Archaeology undergraduate at Edinburgh studying under renowned archaeologist, Professor Stuart Piggott FSAScot. Following appointments at Aberdeen University from 1974-1985, he thereafter returned to Edinburgh University where he was appointed Abercromby Professor in 2012 and was Head of School in 2013-2016. He retired in 2019.

Ian has held a number of senior administrative roles outwith academia and has never been an ‘Ivory Tower’ academic. He has lectured on Scottish archaeology to many different audiences in the UK, Europe and North America.

Raised in East Lothian, Ian now lives in Kinross-shire with his wife and Labrador and remains very much research-active.  An Atlas of Hillforts of Britain and Ireland, written with an Oxford colleague, is almost complete.

Ian has been a Councillor and Vice-President (2007-10) of the Society, and was the first editor of its Monograph Series.

Treasurer of the Society of Antiquaries of Scotland (2020 – ) 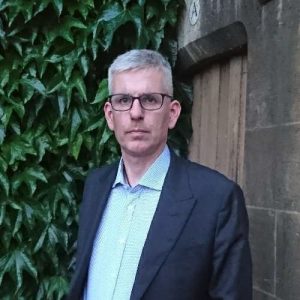 Kenneth is the Founder and CEO of Landward Research Ltd, a consultancy that he established in 2010 that works in the heritage, culture and international development sectors.

He is also currently CEO of FAME, the Federation of Archaeological Managers and Employers, the trade association for commercial archaeology companies in the UK and Ireland. Previously, he worked for the Chartered Institute for Archaeologists for nine years as the Head of Projects and Professional Development, and worked in archaeology in Scotland, England, France and different countries in south-west Asia before that.

He has been a Fellow of the Society of Antiquaries of Scotland since 1993.

A graduate of the University of Edinburgh, he was awarded his PhD by research publication in 2011 for work on ‘Supply and Demand in UK commercial archaeology from 1990-2010’. He also studied for a Masters in Landscape Archaeology at the University of Sheffield.