The latest phase of post-excavation research on the smallest site (RUX6) of the Udal, North Uist has just recommenced, funded by Historic Environment Scotland and Comhairle nan Eilean Siar. The main aim of the analysis and research is to produce a comprehensive account of the site for publication in 2016/17. Although the area, situated on the west coast of the Udal peninsular was trial-trenched in the 1960s, Iain Crawford, the project instigator and excavator, only identified it as a Bronze Age burial site in 1974 due to the effects of coastal erosion. It was not until the beginning of the 1980s that the site was excavated in its entirety by Crawford and his team. Today, the location of the site is hard to identify as it has been completely removed by the sea.

At the time of excavation the kerbed burial cairn was identified as a new type of Scottish monument, but this was the latest of a series of structures present on the site. The full analysis of the structures is currently being undertaken, but it would seem that domestic buildings and those of ritual purpose interwove from the later Neolithic period and into the Bronze Age. There are shades of the Knap of Howar in Orkney in the positioning of two late Neolithic buildings side by side (on the 1980s coast), with evidence of surrounding middens and cultivation. However, a possible mortuary structure and standing stone replaced the earlier buildings when blown shell sand covered them and the surrounding fields. Only later, after further accumulation of sand and the digging and rapid backfilling of many large pits, was the kerbed cairn constructed around a cist that contained a well-preserved human skeleton.

Teasing the story from hand-written, pre-computerised notes is not easy, but enough of the evidence remains to interpret the story and the accompanying finds and samples. The Udal Project is led by Mark Hall (CnES), with support from Beverley Ballin Smith at the head of a team of specialists working on the post-excavation analysis and publication, including Dr Judith Aird, who excavated at RUX6 in the 1980s and wrote her PhD on its mammal bone.

The other key aspects of the Udal Project are to identify the approach needed for the post excavation analysis and publication of the significantly more complicated Udal sites, the mounds known as North and South; to develop and implement a funding strategy for that approach and to refine and find funding solutions for the model that makes the archaeology of the Udal (in a Uist-wide context) accessible to both Island communities and Island visitors.

The image shows archaeologists and volunteers working in bare feet on the fragile sands and contexts of RUX6, and excavating some of the pits and midden areas. 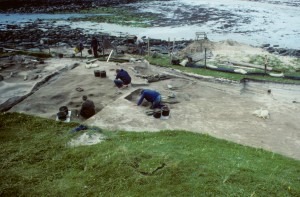