A  Research Grant from the Society supported a collaborative project to reconstruct the lost tomb of Robert the Bruce. Buried in Dunfermline Abbey in 1329, Bruce’s tomb was probably destroyed during the Reformation and fragments of the tomb dispersed.  An exhibition of the 3-D model and artefacts, including a fragment collected by Sir Walter Scott, will be on display at Abbotsford from the 11th April.

To find out more about the project Research in Action – The Tomb of Robert the Bruce by Fellow Dr Iain Fraser which originally appeared in a Society Newsletter. 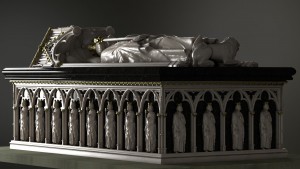