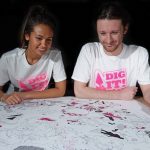 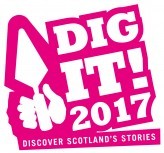 A Glasgow-based artist has brought new life to six stories from the Mesolithic to Victorian era as part of Dig It! 2017

Dig It! 2017, the year-long celebration of Scottish archaeology, commissioned the artwork as the centrepiece for their event programme. The printed teaser programme features 49 events and is available across Scotland, while the online listings feature over 80 events – with hundreds more to be added throughout the year.

The six whimsical images are based on real stories uncovered by archaeology, and reflect the six event themes: adventurous, delicious, inspirational, unscripted, playful and festival. In one scene, playful Victorians climb aboard the Giant Sea Serpent at a long-lost “theme park”. In another scene, an adventurous Mesolithic hunter stumbles upon the legendary selkie while navigating the waves. The intricate artwork has been designed to surprise the audience while inviting everyone to discover Scotland’s stories.

John Felix, the artist behind the illustrations, said:

“Executing a piece with this level of intricacy was a great deal of fun. In the final stages, I worked with the team to hide hidden details throughout the artwork. The small dragonfly in the Doune Castle scene, for example, is a nod to the enormous influence of Outlander.”

The events in the programme are as diverse as the illustration. Historic Scotland will bring their famous Spectacular Jousting event to Caerlaverock Castle in Dumfries, while the Scottish Crannog Centre in Perthshire will be hosting their 20th anniversary celebrations with Celtic crafts. Roman cookery classes will whet appetites in North Lanarkshire and the Society of Antiquaries of Scotland will transport their audience from Edinburgh to Egypt during a joint event with National Museums Scotland. Digs in Stirling, the Highlands, East Lothian, and the Scottish Borders are featured in the programme – all of which are open to everyone, with no experience required.

Dig It! 2017’s own Scotland in Six event also features in the programme. This Signature Event for the Year of History, Heritage and Archaeology includes celebrations at each of Scotland’s six UNESCO World Heritage Sites on 18 April 2017. Activities include a glow-in-the-dark journey through Orkney and a live Minecraft build of St Kilda in the Outer Hebrides.

The programme is now available throughout Scotland and online. To celebrate, Dig It! 2017 will be giving away six signed copies of the artwork throughout the year. Enter the competition, explore the illustration and discover events at DigIt2017.com.