“Moidart: Among the Clanranalds” by Charles MacDonald 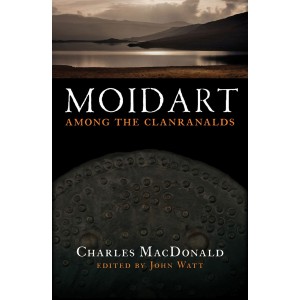 MacDonald, C; edited by Watts, John. 2011. “Moidart: Among the Clanranalds”

If only there were more books about Gaelic Scotland like this. Born in 1835 in Inverness-shire, Charles MacDonald (or Macdonald) was for more than thirty years a priest in Moidart, one of the most impressively rugged and remote areas of the Scottish Highlands. Towards the end of his life MacDonald published a highly readable account of Moidart’s most powerful family, the MacDonalds of Clanranald, in which is included a more general record of the region’s history and folklore. Pleasingly, MacDonald’s enjoyable and highly personal narrative has now been reissued by Birlinn, together with an introduction and explanatory notes by John Watts.

The old Highland way of life – the language, the oral histories, the song and verse, and the close connection between people, landscapes and communal pasts – withered only very slowly in Moidart. Well over a century after Culloden, MacDonald believed there still existed among the people of his parish old allegiances and values which elsewhere were often ‘already things of the past’ (p. 4). Moidart had long been a homeland of the MacDonalds of Clanranald, a formidable family group named after Ranald, a son of John, 1st Lord of the Isles, who, in the early 1370s, was granted by his father the lordship of Garmoran, which included Moidart. Father Charles is a good storyteller and we hear many colourful tales of the Clanranald’s exploits.

Scottish historians sometimes turn their noses up at this sort of book, no doubt fearing that if they get too close to the Gaelic traditions and folktales of their country they will be seen as ‘romantics’ (every Scottish historian’s worst nightmare), rather than stern and serious dons. Certainly, this book does not have the critical focus one would expect of a modern history book. But what it does have is a strong cultural authenticity, and plenty of colour and lively anecdote. Ideal for historians of the Highlands, Moidart: Among the Clanranalds is a marvellous evocation both of the long and eventful history of the Clanranald, and of Moidart’s twilight years as a traditional Gaelic-speaking Highland community.