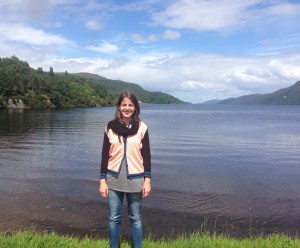 I am really grateful to the Society of Antiquaries of Scotland and to the Scottish Archaeological Research Framework for supporting my participation in the 8thInternational Symposium on 14C & Archaeology in Edinburgh. Particularly, I carried out a conference track under the title “Tell me when: The chronology of the Neolithic necropolis “Bòbila Madurell-Can Gambús” in the NE of the Iberian Peninsula (second half of the V millennium – First half of the IV millennium cal.BC). Using time to understand long-distance exchanges” in the “Bayesian Modelling of Archaeological Sites’ ” session.

As the title suggests, in this communication the results of various analysis of radiocarbon dates regarding the chronology of the long-distance raw materials exchanges in the so-called “Pit Burials” cultural horizon were presented. This cultural horizon is characterized by pit burials with the recurrent appearance of exogenous raw materials, such as honey flint from the South-East of France, Sardinian obsidian, jadeite from the Alps, among others. This recurrence was also documented in other European funerary practices in the same period, such as the “Chasséen” culture in the centre and south of France, the “Cortaillod” culture in Switzerland and the “Square-Mouthed Pottery” culture in Italy. Traditionally, the literature set out long-distance relationships between these communities as an explanation. However, up to now the chronology of “Pit Burials” has not been fully defined, so it was difficult to describe the development of these networks. My participation tried to be a first step to fill this gap. “Bòbila Madurell-Can Gambús” is one of the most significant cemeteries of this cultural horizon, with 125 structures containing human remains. Through statistical analysis and bayesian modelling of radiocarbon dates, we cleared up its chronology. Concretely, we calculated its timing, its duration and the chronological relationship between the presence/absence of the exogenous deposited raw materials as grave goods. It was a first approach to the chronological development of these exchange networks, which, unlike what was traditionally thought and according to our data, seemed to have a relatively short span in a very specific time period.

The 8th International Symposium on 14 C &Archaeology was a great opportunity to show my work to other researchers working on similar methodologies and topics. Thanks to their comments and suggestions I could improve my approaches in these research fields. Moreover, it was an excellent opportunity to discover the work that other researchers are doing from the same methodological point of view in other archaeological contexts and historical problems. All in all, it was a fantastic chance to discuss with specialists from other countries, to exchange views, learn and improve my work. It is for this reason that I would really like to thank to the Society of Antiquaries of Scotland and to the Scottish Archaeological Research Framework to favor my participation.