‘A Football and Banquet at Fastern’s Eve’

In 2018 and early 2019, I conducted research on football in premodern Scotland, supported by a generous grant from the society. This project contributed to my doctoral thesis on the history of Shrove Tuesday/Fastern’s Eve, or pre-Lenten Carnival, in medieval and early modern Britain. It has also laid foundations and made first gains for a post-doctoral project on the cultural and social history of football in Britain before industrialization.

Although only one-third of the grant was utilised, the project as a whole has been successful, with new research findings collected from the National Records of Scotland, the National Library of Scotland Manuscript Collections, the Glasgow City Archives, the Perth and Kinross County Archives, and the Perth Museum and Art Gallery. SAS funding directly supported work at the latter three locations.

Alongside other archival findings related to Shrovetide ball games from London, Dublin, Carlisle and Chester, these materials have supported a chapter of my thesis and an article currently in development. The latter will be submitted to the academic journal Cultural and Social History and is tentatively titled ‘Football as Pension Scheme: Shrove Tuesday Civic Ball Games, Ceremonies and Common Profit in Early Modern Britain’. Beyond academic outputs, the project has engendered a professional relationship with the Scottish Football Museum, which should allow dissemination of this research to the public in the future. I apologise to the Society that the grant was not used to its fullest but am pleased to present some of the novel research it has supported here.

Official patronage of football at Fastern’s Eve, as well as other festivals, took many forms during the premodern period. Educational institutions, for example, allowed or even encouraged the sport. St Andrew’s University provided balls to the colleges on Fastern’s Eve during the 1530s, grammar school expenses for Alexander Gilmour of Craigmillar in 1673 included ‘a football at fastern’s even’, and kirk by-laws of St Magnus in Kirkwall 1684 provided winter-time footballs to ‘the scholers of the grammour school’. As the latter reference suggests, churchmen could support Fastern’s Eve matches as well. After the Reformation, however, kirk patronage generally fell away, leading either to outright condemnation of the game, or begrudging acceptance of its existence.

Kirk patronage was more typical of villages and smaller towns, but institutions in larger urban areas sponsored Fastern’s Eve ball too, using various tactics to circumscribe its violence and potential property damage. This generally took two forms: controlled provision of footballs, or the gradual transformation of the sport into an institutionalized ceremony. Glasgow provides an example of the first, for from before 1574 until as late as 1614, the corporation paid cordiners to furnish yearly six ‘fute ballis to the town at Fastrenis evin’ (Pic 1). Similar examples can be found in English cities like Chester and Carlisle, where cordwainers or shoemakers provided Shrove Tuesday footballs for play in designated areas. Records from pre and post-Reformation Perth show evidence of the second type of civic sponsorship: ceremonial football. From as early as 1546 until well into the nineteenth century, all eight trade incorporations of the burgh had by-laws stipulating that freemen had to pay a fee of football and banquet to the brethren within a year of their marriage, and usually on Fastern’s Eve (Pic 2). In the sixteenth century, some form of game evidently still existed at the heart of the ceremony, but gradually the due became purely monetary. Similar institutional traditions occurred throughout the British Isles. From fifteenth-century Dublin, to sixteenth-century Chester, to seventeenth-century Corfe Castle, Dorset, newlywed freemen submitted balls to their brethren in ceremonies on Shrove Tuesday. 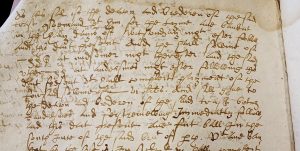 The above were institutionalized versions of the folk practice known variously as ‘ba’ money’, or ‘ba’ siller’, where a new bride or bridegroom, on or after the day of marriage, supplied local boys or men of the community with a football, or money to purchase one. Shrove Tuesday became the day most synonymous with the practice through seasonal synchronicity: it was the finale of a winter season of football, and it was the finale of an intense season of weddings sandwiched between the prohibitions of Advent and Lent. As a festival it symbolised both football and marriage, and all these two cultural practices meant to premodern peoples. A marriage brought risk unto a community, for should a wife be widowed, she and her children would become the responsibility of parish, guild or corporation. One-time payment would be needed in exchange for this risk, and in many communities this ‘pension scheme payment’ was a football. The game was thus equated with the common profit of the community, with serious fines levied in dereliction of duty. In cities, it was a mark of freedom, status and profession to provide for this common profit through football: both a privilege and a responsibility. Even outside the marriage due custom this was so, for in 1590 Glasgow Corporation made cordiner John Neill a burgess and freeman in exchange for yearly provision of Fastern’s Eve footballs.

The findings of this SAS-supported research encourage a recontextualization of premodern football. It was not simply a practice of mob violence and prohibition. It was one of deep cultural and social value to Scottish and British communities, synonymous with status, identity, and the provision of commonwealth. I thank the Society for its generous support.