Bringing landscapes alive: The Atlantic Roundhouses of the Tarbat Peninsula

Reconstruction images of excavated Atlantic roundhouses funded by the Society 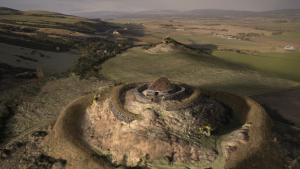 Fig 1: Reconstruction of the Atlantic roundhouse and its enclosures at Easter Rarichie. In the background the monumental turf roundhouse at Wester Rarichie is beginning to disintegrate. Source: Alice Watterson

This project was undertaken by Candy Hatherley (then University of Aberdeen) and Dr Alice Watterson (Freelance archaeological illustrator). The aims of the project were to undertake a series of reconstruction drawings of Atlantic roundhouses on the Tarbat Peninsula, Easter Ross. This work would use the data gathered through the survey and excavation of these sites undertaken by Candy Hatherley in 2013/2014 and also through a series of new kite photographs of the sites.

The work was undertaken by Alice and a kite photographer Kieran Baxter. The team managed to visit and photograph four sites:- Easter and Wester Rarichie, Tarlogie and Tarrel Dun. Alice then used the photographs as a background to creating the digital reconstruction drawings alongside the information gained through the fieldwork undertaken in 2013/14. The results were a series of digital reconstruction drawings which each show a representation of the houses and their enclosures during occupation. 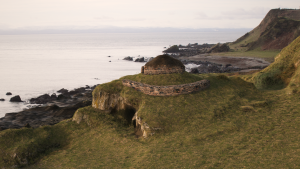 Three drawings have been produced:-

• The house and enclosures on the hill of Easter Rarichie with the early Iron Age turf and timber roundhouse on the adjacent hill at Wester Rarichie shown as a dilapidated structure – Figure 1. 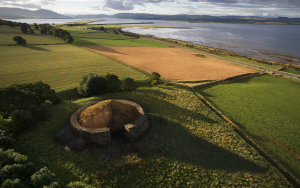 The work has already been displayed in the Tarbat Discovery Centre alongside an exhibition of the results of the excavations. It also appears on their website and on the University of Aberdeen ‘The North’ project pages. Future plans are to publish the results of the excavations of six Atlantic roundhouses on the Tarbat Peninsula in a peer-review journal over the coming year and produce an article for Current Archaeology. The drawings (and acknowledgement of the Society’s support) will appear within these publications.