Follow the Thread: Investigation of a Lint Mill at Baldernock 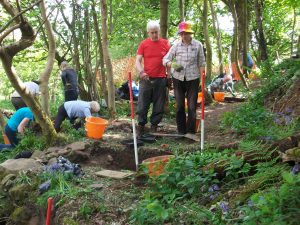 Introduction
The objectives of this project in Baldernock, Milngavie were: (i) to attempt to locate by excavation the mill lade of a suspected lint mill; (ii) to locate and excavate the lint mill site; and (iii) to analyse sediments trapped in the mill dam upstream of the lint mill site for multiple nuclides to age-date the sediments.  Objectives (i) and (iii) were completed using funding provided by the Society of Antiquaries of Scotland, but objective (ii) proved more difficult to achieve because of as yet unresolved uncertainties surrounding the full ‘pathway’ of the lade (and hence the location of the mill building).

Excavation of six trenches, directed by Dr Heather James (Calluna Archaeology) and assisted by volunteers, was undertaken between May 15 and 19, 2018. Professor Paul Bishop (the Society of Antiquaries of Scotland grant awardee) assisted, and undertook the analysis of the mill dam sediments upstream of the excavation.

Site setting
The archaeological excavation site lies on a small terrace about 3m above Craigmaddie Burn, which has a steep fall, across a ‘knickpoint’ or cascade, adjacent to the excavation site.  This drop in the bed presumably explains the locating of a mill at this point, enabling water to be drawn off into the lade upstream of the drop, to be brought to the waterwheel either at its top (overshot or backshot wheel) or at least some way up the wheel (breastshot wheel) for greater efficiency. 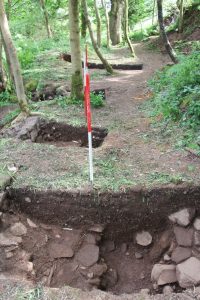 The lade
The stone walls defining the edges of the lade are exposed in the trench closest to the burn and in the next two trenches towards the suspected site of the mill building.  This extent of the lade identified to date covers only about half the length of the site. There is so far no evidence of the lade in the three trenches in the second half of the site. This lack is not yet understood and perhaps implies (counter intuitively, given the site’s topography) that the lade turned abruptly away from the line indicated by the lade features found so far; this issue requires further investigation because the line of the lade will constrain the location of the mill building, which has so far been elusive.

The site of the mill building itself was not investigated, due to the full occupation of the time available in excavating for the lade. Two possible sites for the mill building have been identified, sitting below and downstream of the terrace on which the lade has been identified, and it is intended to excavate these in 2019, should a further funding application to the Society of Antiquaries of Scotland be successful.

Bank revetment
A feature of the site that had not previously been appreciated is the considerable stream-side bank protection works (revetment) on the lint mill site. These works were partially cleared of vegetation and photographed during the investigations reported here.  They were not examined in more detail and will repay further investigation. None of this stonework provides direct evidence of the mill’s location, but the stonework’s extent and scale indicate considerable effort to protect the lade and the mill.  More complex revetment of coursed stones immediately downstream of the excavation site suggests that this area might be the location of the former mill.

Coursed stream-side stonework (revetment) is also found upstream of the dam wall, where it is overlain by the mill dam sediments.  This overlaying of the revetment by mill dam sediments means that the streambank was being protected at this spot before the dam wall was built and began to trap sediment.  The significance  of this aspect of the site history remains unclear and will repay further investigation. 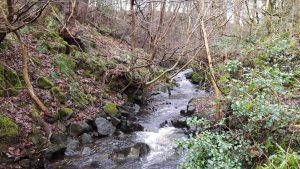 Mill dam sediments
A short section of coursed stonework extends perpendicularly out from the bank of the burn about 20 m upstream of the stonework related to the lade off-take is a remnant of dam wall. Up to ~2 m of unconsolidated sediment crops out on both banks of the burn upstream of this dam-wall stonework and is interpreted as sediments trapped in the mill dam, as elsewhere in Baldernock. The sediments were sampled for sedimentological analyses and for age-dating (contents of total lead [Pb], 210Pb and 137Cs). The total Pb content of sediment trapped upstream of the dam wall was compared with a dated Pb pollution fallout record from Loch Lomond in order to date the lint mill sediments, as has been successfully done elsewhere in Baldernock.

A comparison of the total Pb content of the sediments with the dated Loch Lomond sequence of total Pb suggests that the sediments infilling the lint mill dam date from CE c.1750 at the base of the sediments to CE c.1850 at the top of the sediments, corresponding in part to the era of support of the linen industry by the Board of Trustees for Fisheries, Manufactures and Improvements.

Some of the 210Pb and 137Cs samples are still being counted at SUERC but several conclusions are already clear. Firstly, the surface sample has elevated levels of 210Pb and 137Cs as expected, having been exposed to the atmosphere since the mill dam was breached. Secondly, the samples at depth that have been measured so far have essentially zero content of 210Pb, confirming that these sediments must predate the last 150 years or so.  In other words, the 210Pb data confirm that the mill dam sediments pre-date 1850.  It is suspected that the very low, but nonetheless non-zero, 137 Cs contents below the surface layers reflect downward diffusion of small amounts of the nuclide in this situation of sub-aerially exposed sediment with groundwater draining through the sediment to the incised burn. The final measurements of the two nuclides are awaited with interest, and once we have all data we will wiggle-match the measured Pb contents of infilling sediments in the mill dam to the Loch Lomond record in a statistically rigorous way to confirm the pre-1850 age of the sediments that the 210Pb data are suggesting.

Conclusions
It is clear that a stone-lined channel, which is interpreted as a mill lade, abstracted water from Craigmaddie Burn downstream of a now-breached dam that has been filled with sediment that dates from before 1850.  Further excavation should clarify the remaining extent of the lade and locate the mill building. Further analysis of the mill dam sediments and dating of a second profile through the sediments using total Pb, 210Pb and 137Cs would also be valuable to confirm the chronology suggested here.  Perhaps most importantly, investigation of the Minutes of the Board of Trustees for Fisheries, Manufactures and Improvements may record support of the Dowan Lint Mill and help to provide a firm basis for the chronology of this intriguing site.