Geophysical survey at the Roman forts at Golden Hill, Duntocher and Croy Hill 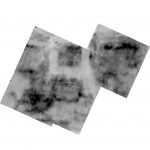 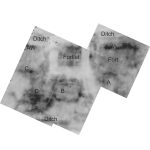 The aims of the survey at Golden Hill in 2017 were (1) to resurvey with resistivity parts of the fort at higher resolution in order to define better the structures detected therein in last year’s survey (Jones 2016), and (2) to extend the magnetic survey of the Antonine Wall and Ditch westwards down the slope to the Wall’s visible stone base within the railings.

Resistivity survey within the Annexe, fortlet and fort

The results (Fig. 1a) show generally good detail of structures lying within the Annexe away from the fortlet and fort. These structures are of considerable interest as they do not appear on Anne Robertson’s plan of the site based on her excavation (Fig. 2; Robertson 1957, Fig. 23).  Attention is drawn (Fig. 1b) to:

Extension of the Antonine Wall and Ditch northwards 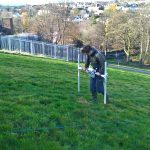 The magnetic survey in 2017 explored the area beyond the Path where the terrain changes dramatically, sloping steeply down (Fig. 4) to Duntocher Burn with the Wall and ditches following that slope to the NW past the extant Wall base (now surrounded by a metal enclosure).  The new survey aimed to follow the line of the ditches, bearing in mind that the obstacles presented by bushes (B) and a dense line of trees (Tree line).   The results indicate the western and central ditches (yellow lines in Fig. 5b), separated by ramparts (blue). The line of the western ditch progresses in a NW direction as far as the bushes whereupon it curves, then narrows and finally widens again as it becomes more visible just north of the Wall base.  At the bend and merging with this ditch is the central ditch. 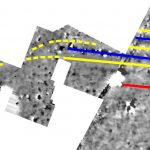 The results of this survey now call for a significant reappraisal of the different components of this fort and its defences.

Robertson A.S., 1957, An Antonine Fort: an account of excavations carried out on the Antonine Wall and fort on Golden Hill Duntocher, Dunbartonshire, Edinburgh. 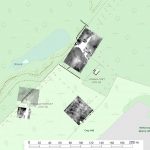 The fort at Croy Hill (NS 7335 7652), which was investigated by Macdonald (1932), has some apparently unusual features: (a) the fort’s north gate lies to the west of the natural causeway across the Antonine Wall (AW), and (b) the AW rampart and ditch bend roughly halfway along the fort’s north face. The fortlet, excavated by Hanson (Hanson in preparation), occupies the spot where, uniquely, the AW ditch diverges from the rampart.  The survey focused on the northern part of the fort and beyond to the bath-house and on the fortlet’s ditches. The opportunity was also taken of including a small area that was expected to be part of the vicus.

The survey was carried out in October 2017 using resistivity; magnetometry, which would have been a preferable technique, was precluded owing to igneous geology. The areas of investigation required considerable cutting back of thick vegetation in advance of the survey. This was accomplished thanks to the intervention of Andrew Nisbet’s team at HES’ Antonine Wall Depot, Falkirk.

Fig. 6 shows the collective results. At the fort and its vicinity to the NE a section of the AW close to the bath-house has been detected, yet the latter appears, if anything, robbed out as its location is associated with low resistance (light grey to white); nor has the adjacent pre-fort ‘well’ (as proposed by Macdonald (1934, 264-67)) been detected, although it is noted that much of it lay at a depth of at least 1m (Macdonald 1934, Fig. 33 top).  Lying to the east and south-east are weak anomalies probably representing building structures which, because they do not respect the orientation of the fort, may well relate to the 18th (and later) century farmstead that occupied much of the fort and its vicinity.

At the fortlet the results were limited to the detection of the field wall and the likely eastern ditch which apparently did not extend beyond the field wall.  The fortlet’s western ditch was not located; instead there is a hint of Hanson’s E-W excavation trench of 1977-78.

In the vicus there is ample evidence of cultivation marks in a NW-SE direction.  Beyond that is the fort’s outer ditch and rampart, two possible, weakly defined rectangular structures and one more circular structure at right angles to those cultivation marks and with internal divisions, separated by ditches.

The work at Duntocher & Croy Hill was generously funded by the Society of Antiquaries of Scotland.