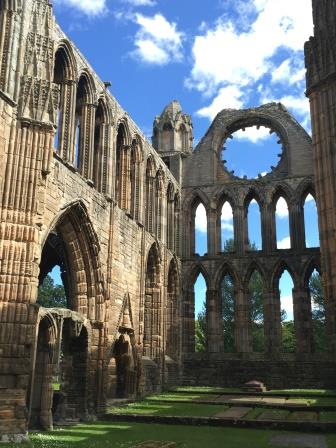 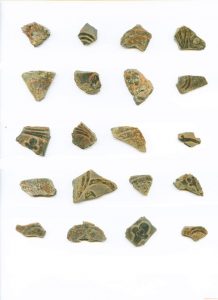 The elemental composition of glass can be used to tell us what recipes were used to make the glass, which raw materials were chosen and in some cases even where the glass may have been made. A total of nearly 250 glass shards from 13 medieval sites across Scotland -which were typologically dated to between the 13th – 15th Centuries – have been analysed using Scanning Electron Microscopy – Energy Dispersive Spectrometry (SEM-EDS) to identify major and minor elements. A further 250 samples of Post-medieval window glass have also been analysed by SEM-EDS and portable X-ray Fluorescence (p-XRF). Finally, glass working waste from Morison’s Haven – the earliest known glass manufacturing site in Scotland to be excavated (Cressey et al., 2012) – was also analysed to investigate the recipes of the glass made there.

The research grant from the Society of Antiquaries of Scotland was used specifically to carry out analysis by Laser-ablated Inductively Coupled Plasma Mass Spectroscopy (LA-ICP-MS), on 60 samples of these samples, at the Natural History Museum. This allowed the characterisation of trace and rare earth elements in Scottish glass of this period for the first time.

The results for the medieval window glass show that the glass is likely to have been imported from a range of manufacturing sites across Europe, with regional and chronological differences.  Most the glass studied is dated to the late 13th or early 14th C and as expected is a potassium rich ‘forest glass’. The cathedral sites of Elgin and St Andrews have a similar range of glass compositions. However, differences can be seen in the base glass compositions of the coloured glasses which suggests they were sourced from specialist manufacturing sites. For example, there are two distinct blue glass compositions found at both Elgin and St Andrew’s which are likely to have been sourced from different manufacturing locations.  The first is a dark blue glass coloured with cobalt that is rich is potassium. The second, light blue, glass is coloured with less cobalt and copper, but is also made from a different base glass that has lower potassium and richer in calcium, sodium, phosphorous and aluminium. The green and pink glass from both sites have similar base compositions and were likely made to a similar recipe with different colouring agents added and furnace conditions manipulated to produce the colours. The base glass composition of the brown and amber glass is different to the green and pinks and these were likely made at a different location using a different base glass recipe. 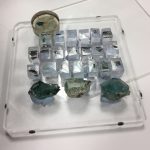 The window glass from the monastic sites of Elcho nunnery and Perth Blackfriars monastery are similar in composition to each other, but clearly different in composition to the glass from Elgin and St Andrews. While the decoration is typical of the late 13th and early 14th Centuries, the glass primarily has a high-lime low-alkali composition, which may be indicative of a later date and made in the 15th century. Further work is ongoing to interpret the LA-ICP-MS trace element and rare earth element (REE) data and to compare with similar work on the continent, where REE profiles of glass waste from several medieval manufacturing sites have been published.

The analysis of the Scottish post-medieval window glass shows the transition of glass recipes from high lime low alkali glasses to mixed alkali glass, with the addition of kelp as a flux to manufacture glass. This can be seen from the presence of increased strontium in the glass from the late 17th century and early 18th century. 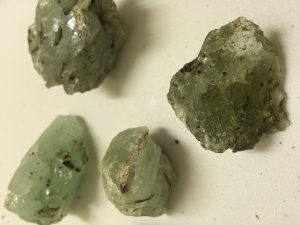 The analysis of the glass working waste from the late 17th/early 18th century glass manufacturing site at Morison’s Haven show that at least two types of glass were being produced at the site. The first is a mixed alkali glass (not a high lime low alkali glass as previously interpreted from visual analysis of the glass waste) with kelp used as at least a partial component of the ashes. The composition is similar to that used to make window glass in England at this time. The second type of glass was made with purified high soda ashes – possibly from imported barilla and soap ashes, which was likely used for making vessels or plate glass.

The full results will be presented as part of PhD research, due for submission in October 2017.

TURNBULL, J. 2001. The Scottish Glass Industry 1610 -1750: “To Serve the Whole Nation with Glass”. Edinburgh: Society of Antiquaries of Scotland.